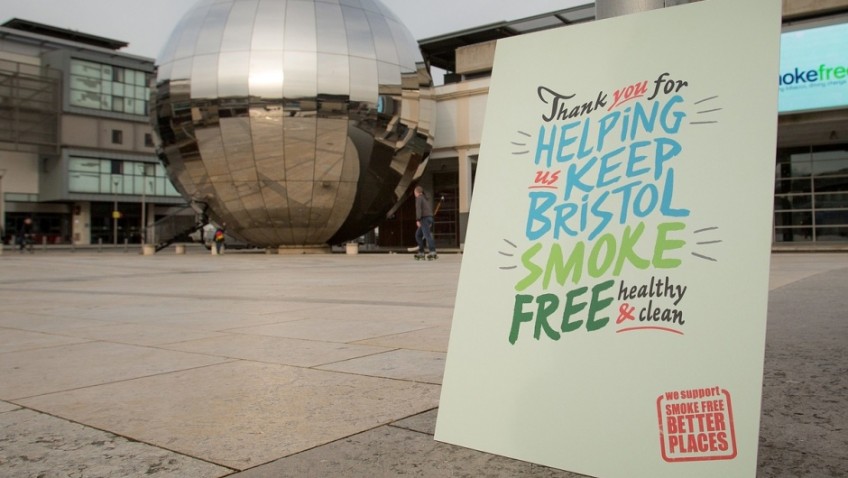 Anti-smoking campaigners installed signs in two busy outdoor spaces – Millennium Square and Anchor Square – after a poll found 61 per cent of locals were in favour.

The pilot scheme will see smokers asked to stub out cigarettes when in the two areas, but it will be up to each individual bars and restaurants if they choose to comply.

The project by Smokefree South West was inspired by mother Kirsty Vass, 33, who was diagnosed with chronic obstructive pulmonary disease a year ago.

Ms Vass, who smoked 20 cigarettes a day for more than 15 years, suffered a collapsed lung and is now constantly short of breath and has to be supported by her daughter Lucy, 15.

The mum from Torbay, Devon, said: “My smoking illness has caused my whole world to come crashing down.

“If young people see you smoking then they think its alight, but they don’t understand what it can do to you, so making smoking less visible in public places can only be a good thing.

“I don’t want other people to be like me because this isn’t a life, it’s a life sentence.

“If I can make people realise that this is what smoking does to you then please, please, please quit now because it’s really not worth it, especially if you’ve got kids.”

A study of 1,000 people conducted by Smokefree South West revealed more than four out of five people have encouraged a friend or loved one to quit smoking.

More than half said that the fact their friend or loved one still continued to smoke made them feel anxious, with more than one in ten complaining that their worry kept them awake at night.

New York, Toronto and Hong Kong, have already banned smoking in some popular outdoor locations and it is hoped the scheme could be embraced by other UK cities.

Bristol was named European Green Capital for 2015 and assistant mayor for public health Daniella Radice said: “I am excited to see how this pilot can change people’s habits and make Bristol an even more enjoyable place to live and to visit.”

Do you agree that smoking should be banned in outdoor public places in all parts of the country? Ed.