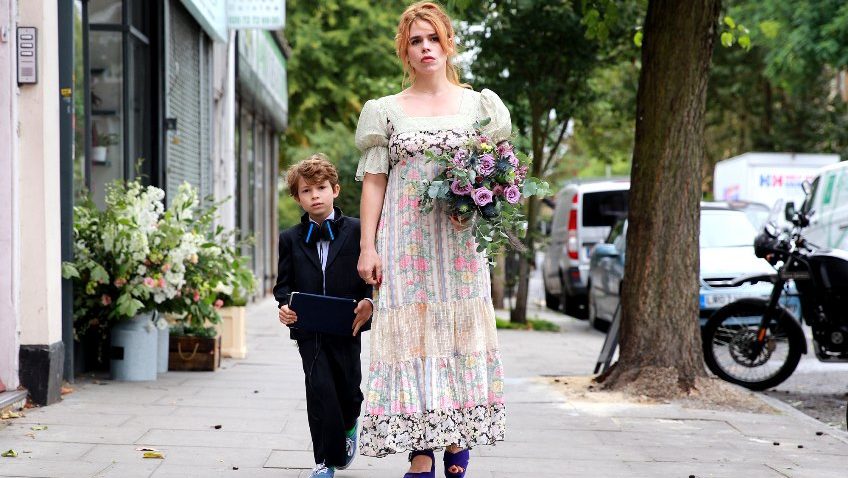 Billie Piper is a modern London woman in her feverish directorial debut.

Whether you know her best as a fifteen-year-old pop star; or Doctor Who’s time travelling companion, Rose Tyler; as Belle de Jour in Diary of a Call Girl, the eponymous anguished, infertile wife in Lorca’s stage play, Yerma, or Suzie Pickles, a former child screen star plagued by a phone hacker in I Hate Suzie, you may not be surprised that Billie Piper now stars in an anti-romcom that she has written and directed.

Given Ms. Piper’s resumé, you may not be surprised at the sexually explicit dialogue, an unusual striptease, or the basic plot of a single mother named Mandy grappling with a bullying boss and a peculiar co-worker named Pete (Leo Bill) who becomes her new troubled boyfriend.

The first scene establishes the central relationship that will run through the film in its mystifying acidity and crudity. Mandy is stuffing her face in a restaurant on what is a first date with her co-worker Pete. ‘So why are you single, Peter?’ Mandy asks. It is an easy question for the audience, even if it takes Mandy the entire film to figure out.

‘I find women in the main intolerable,’ Pete responds, adding that Mandy would be ‘a shit wife’ because she is a modern woman, who has ‘more testosterone running through their veins than blood.’ Pete also announces he is a ‘man of faith’. For Mandy, a staunch nihilist, it is ‘a strange thing to say’, so she comes up with something stranger, warning him, ‘I give really bad blow jobs.’

Mandy, who has an adorable, but challenging young son, called Larch (Toby Woolf) who displays signs of autism, ADD or both, admits that she finds Peter interesting and seems to appreciate his blunt honesty. Either Mandy loves a challenge, or she is a masochist, for Pete is as difficult as Larch, and he is the opposite of adorable. That can be the only explanation for what follows. After running out of the restaurant to vomit and rushing home when Peter predicts they will marry within the year, they begin a relationship.

Mandy lives with her chain-smoking mother (Kerry Fox), who is still in love with her estranged, husband (David Thewlis), a laid-back, heavy drinker who pops by frequently and seems to get on with Pete. There are several scenes with Mandy and her mother and father, but either the way the sound is recorded – with an echo – or their mumbling, made it difficult to understand them on the digital link provided for this review.

If Mandy’s personal life is far from ideal, her professional life is worse. At one point we see her walking around tapping her temple with the fluttering fingers of both hands, a gesture adopted by all the female passers-by to signal anxiety, perhaps. This is one of several stylistic flourishes Piper employs to dramatise internal feelings, some of which prove more distracting than ingenious.

Mandy works for a bullying boss to whom she and other women writers pitch female-centric ideas for media projects. During one chaotic meeting, her boss fires her on the spot – surely a rash thing to do with the UK’s current employment laws.

The remainder of the film charts the puzzling relationship between emotionally detached Pete and self-deprecating Mandy as they decide to marry. On one pleasant family-to-be outing, Larch has a tantrum in public and Pete asks Mandy to intervene as Larch’s conduct is embarrassing. But suddenly, Pete becomes tempted to join in and become part of the embarrassment. He gets down on the ground with Larch and starts thrashing and wriggling around on the concrete piazza. From then on Pete seems to get on well with Larch.

In anticipation of their own marriage, Pete invites Mandy to a friend’s wedding where the bride is none other than an effervescent Lily James. Here there is an energetic scene where the enticing bride and romantic groom dance seductively and happily. One by one the guests, including Larch and Pete, and finally, an initially reluctant Mandy, join in a spontaneous dance of wild abandon. It would have been a great climax if contextualized in a story leading up to it, but so much of the film is frenzied, that it seems as random as nearly everything else, including a penultimate scene in Spain of all places.

Mandy criticizes woman who claim they have it all or can have it all. But still, she wants something. The film is her journey to find whatever that is.

Piper seems to be presenting, warts and all, the predicament of the modern woman. With extensive experience in the media world, three children, and two husbands behind her, including Laurence Fox, the anti-lockdown leader of the Reclaim Party who ran for London Mayor, she is well qualified to put her finger on the zeitgeist. But the film’s self-indulgent narrative and frazzled, self-absorbed characters, might make it difficult for many audiences to care about her or her search.