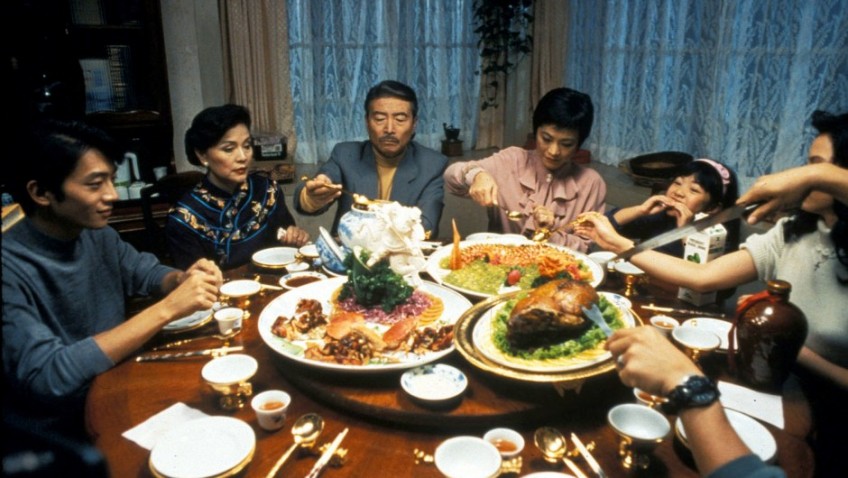 THE ANG LEE TRILOGY (Altitude) is a box-set containing the Taiwanese director’s earliest films which established his international reputation.

They are full of beautiful women and beautiful food. Warm and humane, they deal with cultural and generational difficulties and the tensions resulting within the family.

Lacking a common language they cannot communicate. He fails to adapt. The strain of all three living together proves too much. What do you do with elderly parents? Where does the son’s duty lie? Is it to his wife and young son or is it to his dad? THE WEDDING BANQUET (1993). A gay Chinese young man (Winston Chao), living in Manhattan, hides his sexuality from his parents and, with the connivance of his Caucasian partner (Mitchell Lichtenstein), goes through a bogus marriage with a young Chinese woman (May Chin) who is desperate for a Green Card.

The result is a mixture of family drama, screwball comedy and farce. Directed and acted with charm, it is given an Asian/American twist; its strength is that Lee is always aware of the groom’s humiliation. It’s a sweet gay film for straight audiences; however, you might well think twice about having an expensive Chinese wedding banquet yourself. The pranks can get pretty embarrassing.

EAT DRINK MAN WOMAN (1994) offers food, glorious food, one mouth-watering dish after another. A widowed father (Sihung Lung) has an awkward relationship with his three unmarried daughters: a schoolteacher, an air line executive and a student, each having a different agenda and baulking against tradition.

He is a Tainwanese master chef and his Sunday lunch is a banquet. There has not been so much food on the table since Babette’s Feast. The film spends much of its time in the kitchen and I will take on a bet that having watched the film you will want to have a Chinese meal as soon as possible.