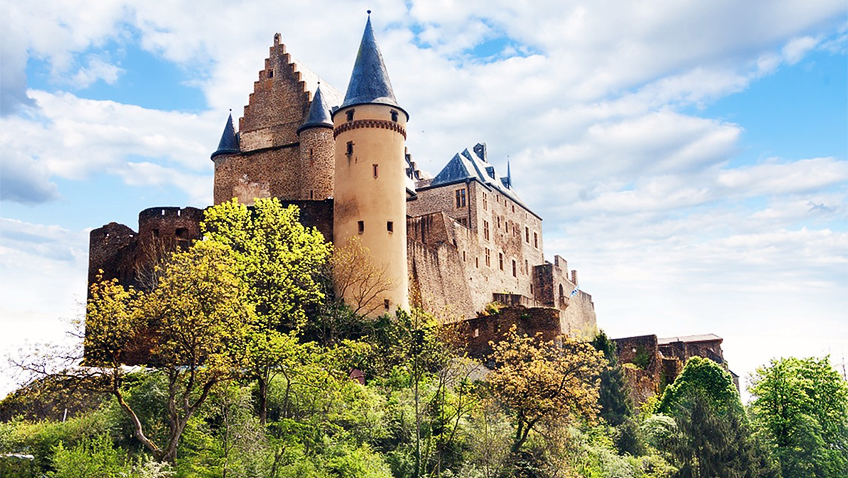 Luxembourg – more than just a city

Many of you will be familiar with the city of Luxembourg for its commercial associations more than for its tourist ones. It is after all one of the three official capitals of the European Union – in case you are wondering Brussels and Strasbourg are the others – as well as being the home of the European Court of Justice, the highest judicial authority in the European Union. It is also well known for its financial centre, in particular its banking, with the financial sector being the largest contributor to the country’s economy.

But the Grand Duchy to give it its proper title, is more than just its capital city. It is a diverse country separated into five separate regions all of which have something a little bit different to offer the tourist, and with English widely spoken it’s a country that is welcoming to UK tourists and well worth a visit.

The Éislek region, known as Luxembourg’s Ardennes, is in the north of the country the area is largely forested, and is well known for its walking and cycling trails. If you like your walking, as I do, then this is an area to visit. It’s walking is dominated by two long distance trails, the Escapardenne Lee Trail and the Escapardenne Eislek trail both of which are included in the Leading Quality Trails of Europe 2018. This is a network of trails across Europe certified by the European Rambler’s Association and designated as long distance walking trails.

The Lee trail starts in the pretty little town of Ettelbruck and goes for some 53 kilometres, finishing in the small village of Kautenbach where it joins up with its bigger brother, the 106 kilometre Eislek Trail, which goes on into Belgium and finishes in the small town of La Roche en-Ardenne.

The trail is easy to follow, it is well signposted along the way and it is broken down into eight stages from start to finish meaning you can do the walk as a linear journey if you wish. Each days walking starts in a small town or village that is connected to the train network meaning you can either base yourself in one place and catch the train each day to your start and finish point or you can advance along the trail day by day and use a luggage transportation service to move your luggage along for you as you walk. The train service in Luxembourg is very efficient and runs along the route approximately every 30 minutes – and what’s more it’s incredibly cheap – just 4 Euros for a day pass, allowing you to travel as much as you like, anywhere in the country for this modest fee.

The beauty of the trail is that the forests are almost deserted, and you really are at one with nature. There is plenty to see from the high escarpments with plenty of cover from the forest canopy. This is a rugged, mainly unspoilt area for walking. Just a word of caution though – some of the walking can be quite difficult on uneven terrain and you’ll certainly need a rest when you get to the top of some of the climbs. But don’t let that put you off!

But this part of the country is not just about walking, it’s about so much more. As you walk there are plenty of places to stop and visit, one being the pretty town of Clervaux, located in a deep narrow valley alongside the River Clerve. The town is noted for its 12th century feudal castle, which nowadays is an exhibition centre and home to the famous photographic exhibition known as ‘The Family of Man’ . This exhibition was created by the famous photographer, Edward Steichen and was first exhibited at the Museum of Modern Art (MoMA) in New York in 1955. Having toured the world it found its permanent home at the castle in 1994. The collection is considered so important that it is part of the UNESCO Memory of the World register which was established to safeguard the documentary heritage of humanity against collective amnesia – a noble initiative if ever I heard of one!

No visit to Luxembourg would be complete without a visit to one of the prettiest towns in the Duchy and that is Vianden. Set on the banks of the River Our, the town is a little gem and well worth a visit. You can get there easily by bus on the afore-mentioned 4€ ticket. Vianden is dominated by its magnificent castle that you can reach either on foot or by taking the Duchy’s only chairlift to the summit and then walking back down to the castle itself.

Luxembourg is an alternative destination that is easily accessible and easy to get around. Give it a try – you might be surprised!

For more information on how to get there, places to stay and things to do go to the Visit Luxembourg website at www.visitluxembourg.com

For more information on the Leading Quality Trails of Europe visit www.leading-quality-trail.eu

For more information on the Eislek region of Luxembourg visit www.visit-eislek.lu

For more information on either the Lee or Eislek Walking Trail visit www.escapardenne.eu

For more information on The Family of Man visit www.steichencollections.lu