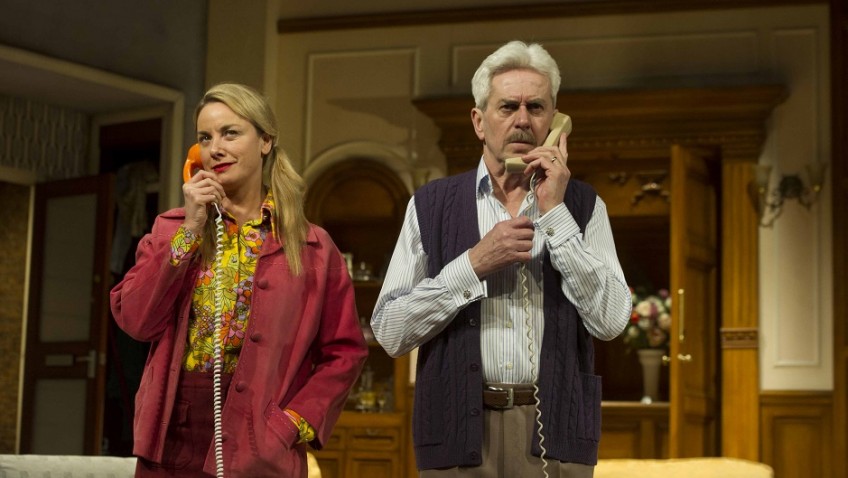 Alan Ayckbourn’s classic comedy is back in the West End

Robert Tanitch reviews How The Other Half Loves at Theatre Royal Haymarket, London SW1

To date Alan Ayckbourn has written 79 plays and he is still writing. How many of them will actually last in the way the plays of Noel Coward and Terence Rattigan have lasted?

Quite a few I should say. How The Other Half Loves is up there with Ayckbourn’s Absurd Person Singular, Bedroom Farce and The Norman Conquests.

The play is essentially an ensemble piece and needs and has got a cast of equal weight. The action takes place in two quite separate living-rooms but they both share the same set and so the action in both households can take place simultaneously. The actors share the same space; and it is this which makes the comedy so original and appealing.

Ayckbourn’s technical virtuosity dazzles. At the play’s premiere in 1969 Robert Morley in his curtain speech jokingly congratulated the audience on having understood it after only one viewing, claiming that he himself still couldn’t follow it after a month of touring with it in the regions.

The farce springs from the lies a wife (Seagrove) and her lover (Merrells) tell to cover up their affair; though the very idea that these two particular people would be having an affair seems highly unlikely.

Le Prevost has some of the funniest lines. He plays the bumbling, clueless husband, whose intervention leads to a totally innocent couple being incriminated. The high spot, and a classic comedy scene in its own right, is when two separate dinners, which take place on two different days in two different places are played concurrently at the same dinner table.

The director Alan Strachan is highly experienced in directing Ayckbourn’s plays and the expert timing, verbally and physically, in this scene in particular, is a delight to listen to and watch.

The best comic double act in town is by Gillian Wright and Matthew Cottle as the innocent and sexless couple. Matthew Cottle, a regular performer of Ayckbourn, knows exactly how to act boring-dull and make it extremely amusing.

He is playing the sort of husband who is liable to slap his wife’s wrist. “Do you realize how many hours I have put into that woman?” he moans. His most serious moment is when he is incapable of apologising to her and the laughter ceases completely which is exactly as it should be.