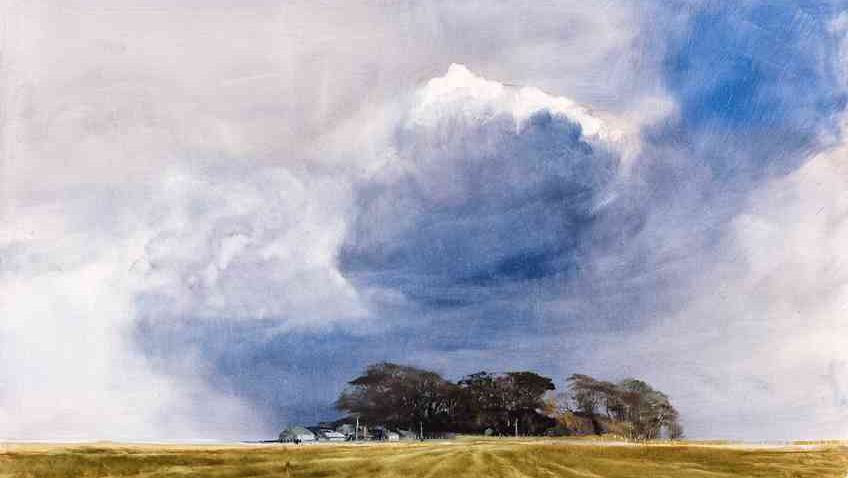 A poignant biodoc about art, ageing and painting nature’s eternity

The only good thing to come out of Donald’s Trump environmentally disastrous golf course in Aberdeenshire was the serendipitous meeting of Scottish landscape artist James Morrison and documentary director Anthony Baxter. It was, in fact, Baxter’s 2016 documentary You’ve Been Trumped Too, that prompted the octogenarian artist to request a meeting. Baxter was equally impressed, and the idea for Eye of the Storm was born.

The result is a pitch perfect tribute to a charming humanist with a charmed life, whose art is owned by J.K. Rowling and the Royal Family but is still affordable. Baxter follows the artist over what turned out to be his final years, as Morrison confronts his fading eyesight and memory to prepare for his 25th, and final, exhibition last year, seven months before his death at 88.

Penetrating artists’ quotations serve as markers to Morrison’s artistic life, like this from Claude Monet “I see less and less. I will paint almost blind, as Beethoven composed completely deaf.” Is it a coincidence that Morrison paints listening to Beethoven?

Baxter provides an overview of Morrison’s life using existing video footage of his happy, 22-year teaching career at Duncan of Jordanstone College of Art, Dundee and his world-wide travels, painting out of doors. Already middle aged, Morrison made four trips to the Arctic, painting in Greenland, Baffin Island in the Canadian arctic and Ellesmere Island, one of the most remote places on earth. ‘When I got home and tried to write about it, I found that I was speechless.’ Fortunately, his paintings tell the story through exhibitions, the most recent being Among the Polar Ice at the McManus Gallery in Dundee just before the pandemic.

Where no footage is available, talented animator Catriona Black – who expresses her sadness that Morrison died before they could meet – illustrates Morrison’s story with animation that is complementary to his art. Baxter also brings in archival material from, among other sources, a BBC programme that a young, bearded Morrison narrated about the artist colony of Catterline.

Here, in 1960, Morrison’s life connected with another Glasgow School of Art graduate: Joan Eardley, who died of cancer in Catterline, aged 42. If Eardley’s stylized portraits of working-class Glaswegian children of the late 40s and 50s made her famous, Morrison’s 1950s “portraits” are of Glaswegian tenement buildings, which, like his landscapes, are devoid of people. ‘People seem kind of irrelevant to what the landscape is about’, he gingerly explains.

It is the buildings themselves that take on personalities and create a magical atmosphere. ‘I never thought I was making a social statement,’ Morrison says. ‘I was painting parts of Glasgow that no longer exist.’

A Francophile who uses brushes from Magasin Sennelier in Paris, where he spent two idyllic winters with his beloved, late wife, Dorothy, Morrison is influenced by the landscapes of Claude Lorrain and Fontainebleau’s Barbizon School and Dutch Golden Age landscapes.

When it comes to his contemporaries, however, Morrison prefers not to be influenced. Joan Eardley was painting landscapes and seascapes in Catterline before Morrison moved there in 1960, three years before her death. Speaking of Eardley’s recognizable style, he admits, ‘I was one of her friends, but because she was such a powerful, powerful painter I felt that, if I had to develop myself as a painter, I had to keep her talent at arm’s length.’

Octogenarian Morrison shares his fears about the future with Baxter, even admitting that his memory is so bad he had to ask his daughter, Anne (his son John is an art historian) to write down the director’s name on a piece of paper. But sight is a more pressing concern. ‘My sight has quite badly deteriorated, and the very thought of coming in here and not being able to pick up a brush and do something with it really terrifies me’.

“In here” is his studio in his large white house on the sea in Montrose between Dundee and Aberdeen, where Morrison has been confined after a recent operation. He is reminded of a photo of the elderly Matisse sitting in a wheelchair and painting on the walls using a long pole. Matisse’s ill health and fading eyesight prompted him to work with painted cut-outs and invent a new art form.

Matisse, however, was not an outdoor painter. It is a difficult transition for a painter like Morrison – particularly one who eschews photography as an aide-memoire – to paint inside. Having little choice and encouraged by new glasses with magnifying lenses and a blank stretched canvas waiting for him on an easel, he soldiers on.

Swirling blue paint all over the canvas, Morrison talks us through the early stages of his creation: ‘Although the lower part of the painting won’t be blue, I would never leave this [corner] white, because the white dominates. If you stick with the white uncovered, you’re going to have a terrible time painting. It gets in the way.’

True to his subject, Baxter’s touching biopic steers clear of sentimentality and spiritual messages. ‘You have to avoid making a statement like the plague,’ Morrison tells his Catholic neighbour, Denis Rice, who continues to see God in Morrison’s ominously low and dark storm clouds.

To find out how and where to watch the film then click here.