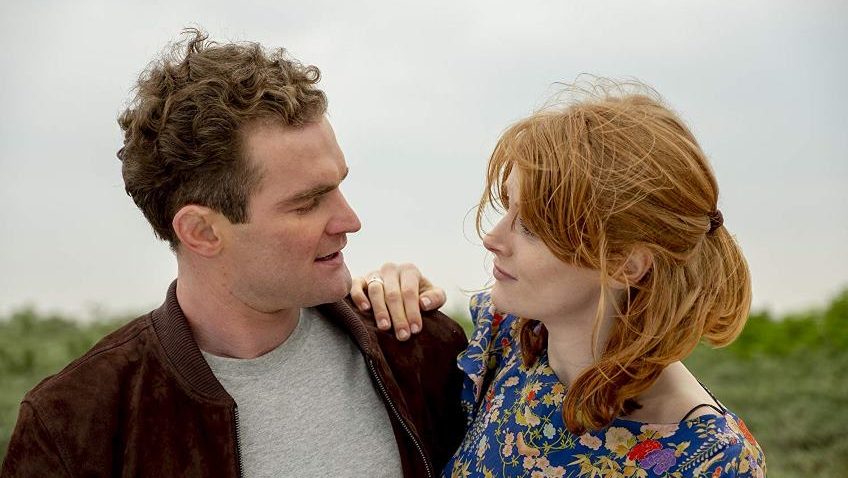 A journey through life – with unexpected twists and turns!

Are we supposed to know who David Tait is; if, that is, we haven’t read up on the film before going to see it? Writer Susie Farrell and director Julian Jarrold (A Royal Night Out, Becoming Jane) seem to think so, judging from captions at the end announcing that David has climbed Mount Everest 5 times to raise money for the NSPCC. Mount Everest is never mentioned in the film up until this coda, nor does the central character, David Tait, show an interest in any physical challenges, (a pilot’s licence notwithstanding). The filmmakers then assume we should admire, respect and care about David when they give us little opportunity to become emotionally invested.

In the first scene, a well-dressed and groomed man in his early thirties climbs up a cliff on a beautiful, sun-drenched coast and stands at the edge, as the camera forces us to look down. It looks like the man is going to commit suicide. If so, it’s odd that he is carrying a bottle of water as though he feared being thirsty while drowning or crashing into the rocks below.

For the first 30 minutes or so of this film, and then in a series of flashbacks, we are subjected to such convincing scenes of child abuse and battered wife syndrome that are both absorbing and harrowing. Joanne Tait (Anna Friel), vivacious, fun-loving, caring and pretty, tries to protect ten-year-old David (Hugo Stone), from his bullying and strict father, Donald (Dougray Scott), but she is a battered wife and has no voice in the family. When Donald loses his job, he takes it out on his family. David is sent to work at the shop owned by a child molester involved in a paedophile ring. By the age of15, he (David is now played by Anson Boon) begins exhibiting the conduct that would make normal parents worry.

Joanne is worried, but when she suddenly runs away in the middle of the night – David is inexplicably left behind with his father. Joanne is such a major presence in the first part of the film it is curious that we never find out what happened to her. Dougray Scott is chillingly good, but his role is underwritten, and he remains a stereotype.

Cut to 2008 when we see a man (Mark Stanley, Dark River) exhibiting autistic behaviour working in a chaotic City trading company. He is so focused and calm that he impresses everyone in the office, including his manipulative, egocentric boss, Jeff Connors (Alistair Petrie). The man is David, now played, very well, by Mark Stanley. However, it is not obvious where we are after all these years or how David got from that abused boy in South Africa to a London City trading floor. It is only when David has an awkward reunion with his father that we see the 30 St Mary Axe, (AKA the Gherkin) out of the window and know we are in London.

Shortly after David starts work, he is paid an unwanted visit by a woman claiming to be his wife (he does not deny it), telling him how proud she is at his achievement. When he shows no interest in her she reminds him that he is married and has two children. ‘’Why don’t you write your number down,” he tells the obedient woman, ‘just so I have it.’ This scene triggers a flashback to South Africa in which we see Donald dragging David out of the cupboard where he has hidden and forcing him to go to work with the child molester.

More confusion, too, when David is invited to a party at Jeff’s sprawling, modern house. With its swimming pool and fake flamingos, it looks like Los Angeles or Miami. He has succeeded in impressing Jeff in the office, but now David is competing with him socially. Before dating Vanessa, a star in Jeff’s office, David has a fling with Jeff’s less attractive wife at their party.

But David seems to be smitten with Vanessa, a woman strong enough (and presumably attractive enough) to help him turn his life around. Montages of the happy couple walking on the beach and falling in love suggest that she has no inkling of his well-hidden past. After they marry, David and Vanessa, who is now pregnant, move into their own California-style home and David buys a fancy sports car, taking after his showy boss. We never see David commuting to work and so the confusion about his location is again disconcerting.

The prospect of becoming a father and the arrival of the baby are stirring painful memories in David that he has never talked about or come to terms with. Within months, David is drinking heavily and having sex with his flight instructor and Vanessa feels she has to protect her baby from its father. Work is affected and David, the golden boy, is sacked, seeking revenge on Jeff by scratching his expensive car. Has David become his father, Donald?

This is harrowing stuff, but the script establishes a correlation between abused children and adult psychopaths that we are meant to take as a given. It is as though the knowledge of David’s past is enough to make us understand his present problems and emphasize with him.

It would be a spoiler perhaps to tell you what happens to David, but if, as captions suggest, David has turned his life around, this part of his life is not covered by the film. Suffice it to say that by the time the captions come up at the end showing David at the summit of Mount Everest, and telling us about the money he has raised for the children’s charity, David is a hero. But there is no mention of his mother or of the wife and two children he supports financially but had otherwise abandoned.

You can read our review of Dark River by clicking here.