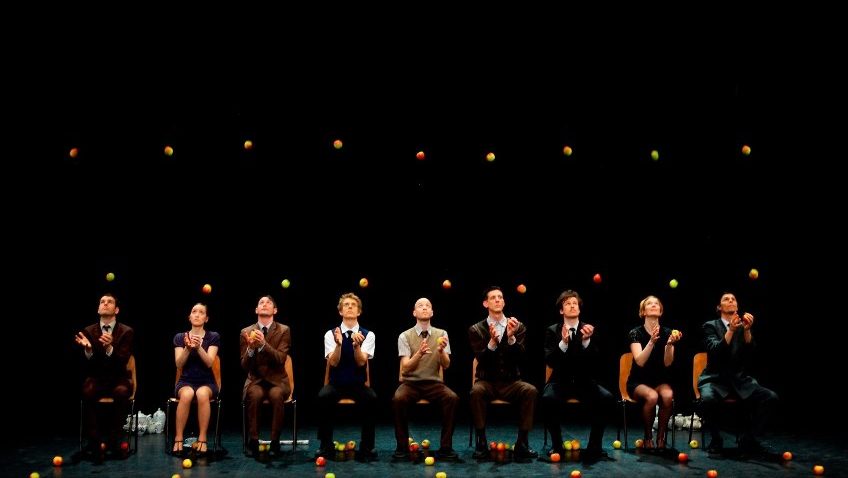 There’s brilliant juggling on line and it’s for free

Gandini Juggling, a UK based company, was founded in 1992 by Sean Gandini and Kati Ylä-Hokkala.

Juggling used to be a single act in a circus or on a music hall bill. Now it has been turned into a full-scale musical entertainment.

The last time I saw Gandini’s company they were juggling balls, skittles and balloons in Philip Glass’s Akhnaten at the London Coliseum for ENO and they were very much part of the production’s success.

Smashed was created for the 40th anniversary of the London International Mime Festival in 2017 and performed at the Peacock Theatre.

The production took its inspiration from the work of the late Pina Bausch; and her influence is strongly felt throughout.

The company had guidance from Bausch’s leading dancer and choreographer Dominique Mercy.

The cast makes its entrance walking round the stage in single file, each of them juggling three balls, in unison, to a catchy tune, “I always want to waltz in Berlin under the Linden Tree.”

The opening parade, especially with the casts’ knowing smiles, is pure Pina Bausch; and an absolute winner.

There are an amazing number of balls in the air at any given moment. The jugglers, who also juggle with apples, do fiendishly difficult routines in unison, sometime solo, sometimes in couples and sometimes en-masse, juggling to a variety of popular songs and even to Baroque opera.

The company’s impressive skills constantly astonish; and not least when one couple, arms intertwined, are juggling with each other’s balls

There is plenty of good-humoured fun when the cast try to distract and sabotage each other. But Gandini, like Pina Bausch, often goes on too long and the jokes can be childish, crude and sexist.

The outnumbered women are treated as sex objects. One woman (with an apple in her mouth) crawls at the feet of seated men who bounce balls off her back.

True to its title, Smashed ends in utter chaos, a total, self-destructive, raucous balls-up. The cast, screaming and laughing, break crockery and wade ankle-deep in debris.

Gandini Juggling is clever and witty. Watch it for free on Vimeo by clicking here.