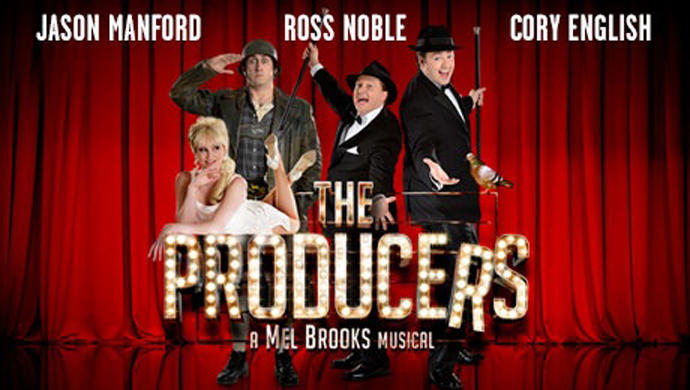 Charlie Hill reviews “The Producers” at the Bristol Hippodrome

The multi-award winning film-maker Mel Brooks has based this musical on his 1968 film of the same name to huge success. Winning a record-breaking 12 Tony Awards and 3 Olivier Awards.

The story tells of a failing Broadway producer, Max Bialystock and his timid, neurotic accountant Leo Bloom, whose chance remark that Max could make more profit from producing a flop on Broadway, than a hit, sets the scene for this hilarious musical comedy.

After finding a suitably dreadful script, Bialystock (Cory English) and Bloom (Jason Manford) persuade the author Franz Liebkind (Phill Jupitas) – a crazy pigeon loving Hitler fanatic – to sign the play rights, allowing them to transform it into the worst ever Broadway musical.

They then hitch the worst Director in town, Roger de Bris (David Bedella) and so the process begins of creating “Springtime for Hitler”, an outrageously inappropriate show about World War II, purportedly bringing glitz and glamour to the Third Reich!

There are some big names in the cast. Jason Manford brings an unexpectedly good performance as the shrinking violet Bloom, with a strong similarity in voice pitch to that of Mathew Broderick in the 2005 film, but bringing his own take on the character. Phil Jupitas plays the eccentric Liebkind with an amusing dodgy German accent and a tour-de-force stage presence. Louie Spence as Carmen Ghia (The Director, Roger De Bris’ companion) is outrageously camp. David Bedella is superb in his role as Roger De Bris, bringing fabulous flamboyance, particularly in the second half and to his performance of ‘Springtime for Hitler’. 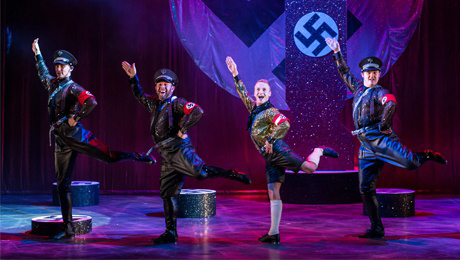 The rest of the cast too are dazzling in their roles. Tiffany Graves shines as the Swedish bombshell Ulla but the outstanding performance comes from Cory English as Max Bialystock. Such comic timing and matched with superb execution of the choreography, his performance of ‘Betrayed’ (which brilliantly sums up the whole story of the show, even including the interval), is stunning.

When you have some of the ensemble playing old ladies with nicknames such as  “Clinch-me-Pinch-me” and “Kiss-me-Feel-me” and singing songs named “Heil Myself”, you know the show has all the right ingredients for a belly-laughing night at the theatre, with great sets from Paul Farnsworth and a live big band sound under the direction of Andrew Hilton.

This is a remarkable tongue-in-cheek satire …. pure gold slapstick comedy.