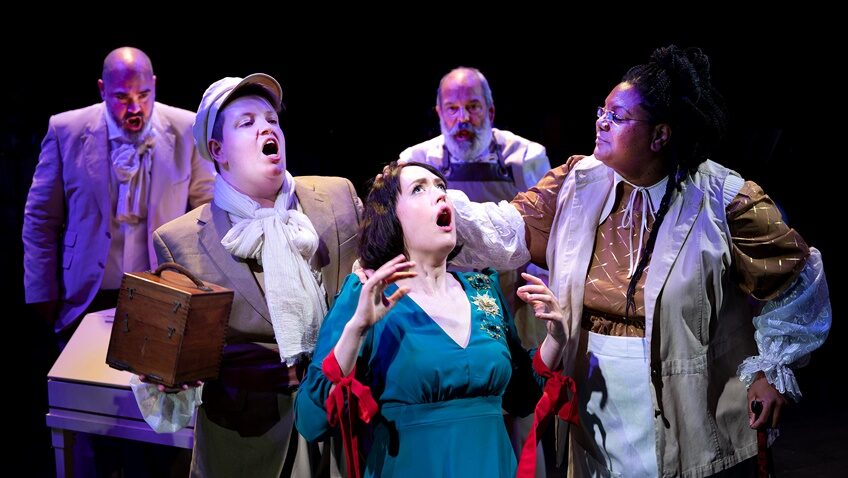 An engaging story, super singing, intriguing musical score and fine, expressive acting are the hallmarks of success when it comes to musicals and operas alike. In telling the incredible story of real-life musical genius Maria Theresia von Paradis, known as The Blind Enchantress, The Paradis Files offers all that. Furthermore, this newly composed chamber opera is an all-inclusive Graeae production (in partnership with the BBC Concert Orchestra and Curve Theatre) so, along with clear, beautifully integrated audio description and captions, comes BSL from two expressive performance interpreters, fully immersed in the emotions of the characters they sign for.

Blind from an early age, Marie Theresia von Paradis was an extraordinarily talented composer and virtuoso pianist, a massive star in the glittering salons of eighteenth century Vienna and all over Europe, where she revelled in exhilarating tours that gave her the freedom to have fun – including many a romantic fling. To her parents’ fury, she was also the lover of a certain, more widely known musician of the day – a Herr Mozart. Later in life, she proudly founded a music school for blind students. Yet in spite of her dazzling success, in spite of her own conviction that blindness was just part of who she was rather than an embarrassment or a drawback, her parents belonged to a society that thought otherwise. Determined to have her “cured” at any cost, they inflicted upon her every cruel, excruciating, traumatic, crackpot “treatment” being pedalled at the time – pins, electric pincers, cutting, bleeding, freezing, binding – until she could take no more. Not surprisingly, her relationship with her parents, especially her mother, was particularly fraught and complicated. Having salacious Salieri groping around as her piano teacher, then later in life undergoing a stillbirth only added to her woes. ‘Ah, the pain!’ is a frequent, painful refrain of both her and her mother.

With this little chamber opera being only seventy minutes long yet having so much to tell, things move along at a fair old flashback lick. This works well for the most part (though a two-act version with a chance to further develop and flesh out characters, relationships and storylines would be a highly tantalising prospect, and a stronger finale would do it fuller justice, too.)

Rather splendidly, to put everyone in the picture before the story unfolds, onstage conductor Andrea Brown and the joyful singers and five accomplished onstage musicians introduce themselves, their roles and their instruments. With humour and simple clarity they describe the various elements of their costumes, appearance, colour, impairments and gender orientation, and give details of set and props. It’s a set that sits well on the Crucible stage, simple and attractive with its delicate hints of Vienna – chandeliers, ornate period chairs, gilded frames, and a white prop piano with illuminated strip serving as a keyboard to mime on, and a beautiful scene painted inside its lifted lid. The piano, though, is a little too prominent at times, separating singers when interactions might be better closer together, especially when signers are involved, too.

Errollyn Wallen’s eclectic score brings interest and intrigue of its own as it travels from strident to poignant, from ploddings, plonkings and abrupt spikiness to beautiful harmony and Mozartian twiddles and flourishes, from piano exercises and Viennese whirls to cabaret – with a wisp of Westside Story along the way. Special moments come from fiddle, accordion, double bass, kettle drums, cymbals and piano, the music generally reflecting well the drama of story and emotions.

The singing is all round splendid and uplifting, several cast members having extra roles as doctors and in the Gossip Chorus. Bethan Langford, visually impaired herself, is thoroughly engaging as Theresia, her mezzo-soprano strong and pleasing throughout its range. Meanwhile, bringing emotion to her fine voice and engendering sympathy is Maureen Braithewaite as Theresia’s estranged baroness mother, once stern and inflexible, who unexpectedly turns up late in life to seek her hostile daughter’s forgiveness and offer explanations if only given the chance. As Gerda, the go-between maid, Ella Taylor’s brightly ringing soprano is a joy, while Ben Thapa puts in a sturdy, imposing performance as touchy-feely, sleazy Salieri, his rounded tenor likewise ringing out to delight the ear.