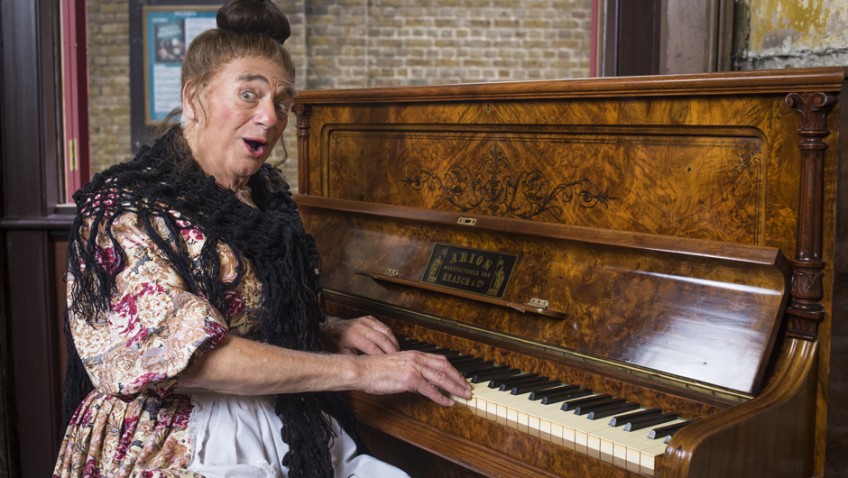 Put pantomine, music hall and good old fashioned entertainment together and you have a show worth going to see – Roy Hudd in Mother Goose at Wiltons in London. Veteran entertainer Roy has written the panto again this year after the success of last year’s Dick Whittington.

Surprisingly Roy revealed that was the first time he’d put on the frock to take on a Dame role, despite being involved in more than 50 pantos. He even met his wife, Debbie Flitcroft, who is directing the production, on the boards.

Roy Hudd has been in the business for over 50 years starting as a Butlin’s Redcoat in 1958. He has entertained us in variety show, sitcoms, soaps, dramas, panel games and several of his own series. There can be few areas of show business where he has not been involved from acting, writing and re-creating famous musical acts. Look for his version of Stanley Holloway’s Albert and the Lion.

Talking to Roy recently was an entertainment in itself. His so familiar voice has more than a hint of laughter and the stories of people he has worked with are full of joy and affection. He is obviously a man who sees the good in everyone. Roy’s passion for show business is as generous as it is diverse. He told me that he never turned down a job and still relishes working with others in film, television or live theatre.

One of my favourite stories was of when he was appearing as Archie Shuttleworth in Coronation Street. One of the young actresses, who obviously did not know of his previous years in the business, advised him that getting the soap role would “be good experience for him”!

An expert on the history of British entertainment, especially pantomime and music hall, he works hard to keep the old traditions alive. Honoured with an OBE in 2004 Roy has won other awards for best actor in a musical as well as lifetime achievement awards.

His face must be one of the most recognisable in show business as he pops up in popular television series such as Call the Midwife and Broadchurch. His inability to wind down in his advancing years is obvious and his enthusiasm for interacting with an audience is what makes him such a success in pantomime. We discuss the modern trend for soap and pop stars to appearing in panto, which may draw in the crowds, but it is a stage presence that is vital in this variety performance.

Which brings us back to the production to be held in Wiltons this December that promises to be a proper traditional pantomime.

Situated in the historic East End of London, within easy walking distance of The Tower of London, the River and the City, Wilton’s is the world’s oldest surviving Grand Music Hall. Over 300 years it has evolved from a sailors’ pub and Methodist Hall to the restored grandeur of today.

Wilton’s began life as five houses originally built in the 1690s, the buildings have had various alterations and reconstructions over the years, including being combined by John Wilton in the 1860s. The largest house was an ale house dating from the first half of the 18th century, serving the Scandinavian sea captains and wealthy merchants who lived in neighbouring Wellclose Square.

From c.1826, the ale house was also known as The Mahogany Bar, reputedly because the landlord was the first to install a mahogany bar and fittings in his pub. In 1839 a concert room was built behind the pub and the building’s life as a venue began. In 1843 the ale house was licensed for a short time as The Albion Saloon – a saloon theatre, legally permitted to stage full-length plays. First created in 1902 for music hall legend Dan Leno, this classic story of the battles between good and evil and the quest for youth, beauty, wealth and happiness has been written specially for Wilton’s by Roy. With a stellar cast and crew, the audience will be taken on Mother Goose’s roller coaster journey from rags to riches (and, of course, to Gooseland) and back again with a few surprises, endless fun for all ages, and much hilarity along the way.

There’ll be song and dance, love and romance, arch villains versus good fairies so brace yourselves for booing, cheering, uproarious laughter and 400-year-old jokes about stuffing. I’ll be there ready with fond memories of childhood pantomimes, ready to join in the sing-along and to boo the baddies: “Oh yes I will!”