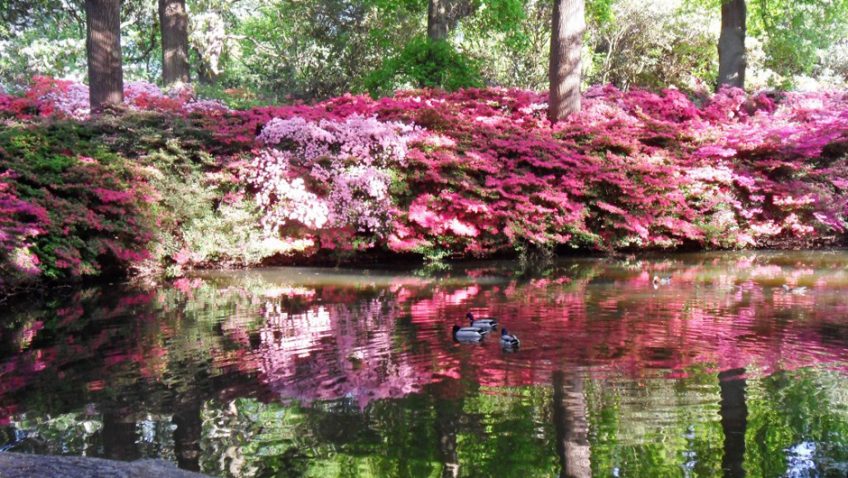 Hello again to followers of the Green Arts – the latest meanderings of a working gardener. I am Rosanna Cavallo whose job may be gardening but it is also my passion.

Garden visiting is one of the favourite pastimes for people over the age of 50. I too enjoy it immensely; a cornucopia of ideas and visual pleasures. At the end of April I went to visit Kensington Gardens where the Palace there has a lengthy royal connection as well as the new Princess Diana Memorial garden, which opened earlier that month, and which specifically I wanted to see. After the death of William III, Kensington Palace became the home of Queen Anne and it is she we have to thank for the development of the gardens around her home.

The Princess Diana Memorial garden is sited in what was previously the sunken garden – said to have been the potting shed area before that. The sunken garden was planted up in 1908 in what is essentially an 18th Century garden style. I remember it previously, sporting every known colour there is; very vibrant, very eye catching and quite unusual in our times. Now it is made up of Princess Diana’s preferred pastels. Having heard it was essentially a white garden I was very interested to see how it had been put together. When training as a gardener I always heard it said that using white flowers in the garden needs to be tackled with care. White is a cool colour and, if you put white flowers in the midst of a bed filled with other colours, the eye will be drawn to the white at the expense of the other flowers. An all-white colour scheme can work if you use it in an area of the garden, say your patio, where you might sit at the end of the day as the light fades; maybe your patio area where white flowers will glow as night draws in as you sip your wine and chat. A large sea of white flowers does not work well if the sun is beating down on them – overwhelming reflection – whereas in dappled shade the glare would be filtered and much more pleasing. Sissinghurst offers a great example of a white garden that works and, as I remember, there the starkness of the flower colour is broken up by interesting paths and small trees with the beds being small and sectioned. At the Diana Memorial garden, sited in full sun, the “breaking up” is done by the colours of the other flowers; pastel pinks and purples and yellows. The flowers used in April were tulips which probably means that the display will change regularly. I thought the tulip display worked very well, very tall white tulips with smaller flowers underneath. The garden was still being worked on and maybe that is why the public could not actually walk inside the garden itself as I remember doing in the past. I recommend a visit. I am wondering if the Diana Memorial garden will set a white flower trend that people will want to copy. Want to experiment with a large mass of white flowers in your garden? You could do it quite inexpensively with bedding plants – especially if you grow them from seed.
May is the time to see the stunning displays from Rhododendrons. Some years ago I regularly did conservation work in my area and a common task was to spend the day removing Rhododendrons from public areas where they were problematic. Passers-by were horrified to see a band of people avidly ripping up plants that were often in glorious full flower, and would stop and tell us off for our “vandalism”. What they did not realise is that in the UK Rhododendron ponticum is seriously invasive. It spreads quickly in woodland areas taking over and crowding out the native plants.

Ponticum is almost impossible to eradicate because its roots can make new shoots – dig it up and remove it but chance to leave the smallest piece behind and away it goes again. Apparently the “invasion” is so bad in Ireland that it is being discussed there in Parliament. For several years a costly Rhododendron management programme has been in place but now there is talk of bringing in the army to deal with the problem.

Clearly, it is selecting the right variety of Rhododendron that is crucial. The above should not discourage people from adopting these very rewarding plants. Rhododendrons are, unsurprisingly, loved by large numbers of gardeners; the many colours of their large, papery blooms in flower in spring make a breathtaking display. Several public gardens are devoted exclusively to them – the Isabella Plantation – see the banner heading picture at the top of this article – is just one.

There has been little positive to say about the weather this spring but, on the good side, the cool temperatures have meant that Rhododendron floral display has lasted well – certainly not affected by hot sunshine which can rapidly make the blooms shrivel. Rhododendrons need moisture but the soil must also be free draining – they grow naturally as woodland plants in peaty soils in the Himalayas. It is wet and boggy soils that are a problem for them. We first saw Rhododendrons in this country when they arrived, from the American north-west along with various species of conifers, as part of the last of three major plant introductions in the 18th century. These were then later replaced, in the late 19th century, by Himalayan Rhododendrons. American trees and shrubs had not always thrived in the British environmental conditions which were sufficiently different to cause a failure to thrive in many of them. On the other hand many Asiatic plants, including Rhododendrons and Azaleas, turned out to be particularly suited to the British climate. Azalea buds have a beautiful shape before they open

I thought it required explanation that a small number of species should originally occur at all in North America. The American Rhododendron Society shed some light on it by speculating that Rhododendrons were originally more globally widespread. In their view unsuitable environmental conditions then probably killed them off altogether in many locations leaving just pockets of isolated appearances.

Rhododendrons, as well and Azaleas and many heathers are members of the same plant family and will all grow happily together in part shade (say, a few hours of daily sunlight and a few of shade) in a most but well-drained soil. When teaching, learners often ask what is meant by both “moist and well-drained” in a soil. I usually ask them to imagine textures, one bucket full of wet porridge and one full of damp used tea-leaves – the latter will be closest. The same Azalea in bud in picture above is here in flower. This bright orange variety is called Gibraltar and grows to 1.2metres

You will not see one Rhododendron in my clay-based neighbourhood. A new(ish) calcium-tolerant stock of Rhododendron (trademark ‘INKARHO’) is available for those who would love to grow them but are gardening on clay. It derives, apparently, from a single Rhododendron found growing in a chalk quarry in Germany (instead of the usual acid soil) which was then grafted together with various individual hybrids. I don’t have personal knowledge of this cultivar and can find little information from people who have grown them – responses from gardening forums seems muted. The only specific drawback I have read about is that they have to be fed more often than the usual varieties. Worth a try?

If you have just moved into a neighbourhood and are starting your garden from scratch the best course of action is to walk your local area. See what plants predominate in peoples’ gardens and/or the local parks before buying new plants yourself. This way you will have a good indicator of what flourishes in local soil.

I’ll end on a note that I found hugely encouraging this month. With the warmer weather it is common to find people working in their gardens and garden chat often ensues. In the area where I live there is predominantly Victorian and Edwardian housing – much of it now replaced – and trees that often date from the same era. People inherit mature trees in small front gardens that would be more suited to parkland. I love trees and want to preserve them but can understand why people don’t want their houses in almost total darkness or a garden where nothing will grow. Talking to someone in this predicament recently I thought he had found an excellent resolution. He does intend to take out the tree but has made a pact with himself that if ever he has to remove a tree he will plant another, in a different place, to replace it. Really good attitude at a time when all of us who live in cities need to think carefully about “greening” them.

Happy gardening until next time.