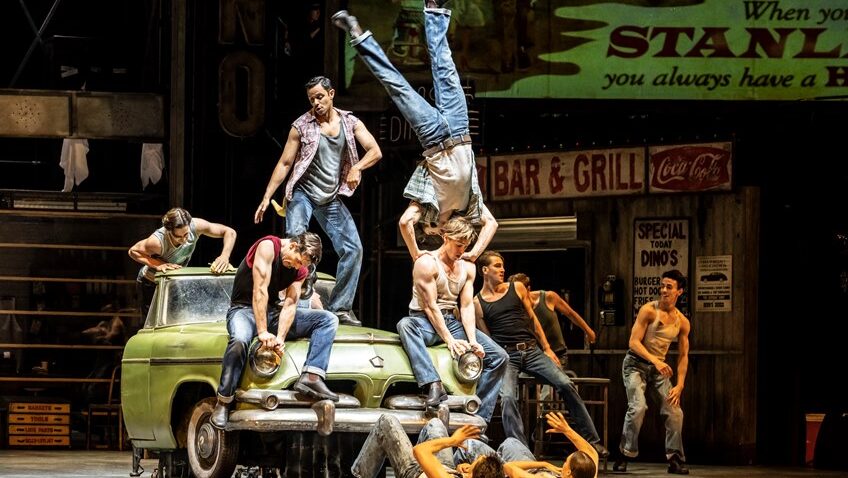 Matthew Bourne’s multi-award-winning, auto-erotic dance-thriller, designed by Les Brotherston, which premiered in 2000, is re-imagined for The Royal Albert Hall, which is celebrating its 150th birthday, a year late due to Covid.

Bourne uses Bizet’s music; but he has got rid of Prosper Merimée’s cigarette girls, soldiers, toreadors and bull-fighting in order to create a lurid film noir melodrama, set in America in the 1960’s and loosely based on James M Cain’s The Postman Always Rings Twice.

The UK’s most popular and successful choreographer loves old movies. The production, loud, brash, crude and homo-erotic, has a raw physicality. There’s nudity in the showers, bare-knuckle fighting in the street and plenty of sex.

The drama takes a bit too long to get started but, once started, the show has a strong story-line, which is unashamedly melodramatic. Terry Davies uses Rodion Shchedrin’s Carmen Suite and re-orchestrates Bizet’s music to produce a very emphatic cinematic score.

Luca (Will Bozier), drifts into a small town in the Midwest and gets employment as a car mechanic at a diner garage run by Dino (Alan Vincent). He has sex with Dino’s young wife, Lana (Zizi Strallen). He also seduces Angelo (Paris Fitzpatrick), a hired help, a sensitive youngster, who is bullied by the community. Luca and Lana kill Dino and then frame Angelo, who goes to prison, where he kills the guard, who was trying to bugger him. He escapes to come back and take his revenge.

There are 65 dancers and musicians, three times larger than the original company back in 2000, but the performance is still not quite big enough to fill The Royal Albert Hall. The actual stage is too far away and more use should have been made of the traverse stage, which juts out from it into the auditorium and can bring the dancers closer to the audience.