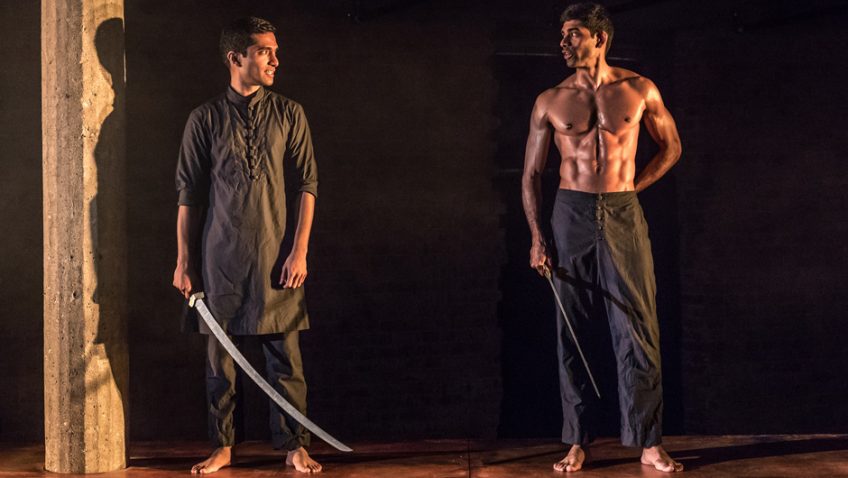 The Bush Theatre opened in 1972 in a tiny space above a pub on Shepherd’s Bush Green. In 2011 it moved to its present premises, a converted old library in Uxbridge Road.

It has now had a year-long £4-million transformation and artistic director Madani Younis celebrates its re-opening with a play by the American playwright Rajiv Joseph and directed by Jamie Lloyd. Darren Kuppan and Danny Ashok in Guards at the Taj

The award-winning, two-hand, 80-minute Guards at the Taj is set in Agra in India in 1648 on the eve of the unveiling of the Taj Mahal.

Built with white marble and inlaid with semi-precious stones, the Taj Mahal is a masterpiece of Mughall architecture and one of the most beautiful sites in the world. The sheer perfection of proportion and detail is awesome.

He had declared that nobody but the masons, workers and artisans would be allowed to see it until it was completed.

Humayan and Babur, two young Imperial guards, childhood friends, stand sentry, chatting away when they should be silent.

Punishment is hard for wrong-doing. If their talk is blasphemous they will get three days in prison.

If they are seditious they will get whipped, shaved, blinded and liable either to be sewn up inside a water buffalo or to be trampled to death by an elephant.

There are many legends about the Taj Mahal. Rajiv Joseph concentrates on the most horrific fiction.

The Emperor decrees that nothing as beautiful as the Taj Mahal shall ever be built again. He orders that every man involved in the building should have his hands chopped off

40,000 hands were chopped off. Babur did the chopping. Humayan did the cauterizing. Their reward for a gory job well done is a dream-post as Imperial guards in the Harem.

Danny Ashok and Darran Kuppan are a good double act. Ashok is Humayan, who is faced with a choice: death or dishonour. Kuppan is the severely traumatised Babur, who feels he has killed Beauty.