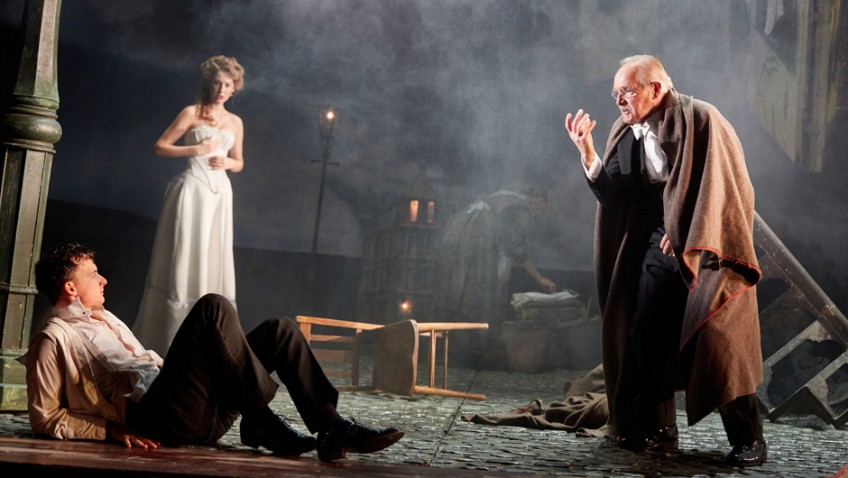 Famous plays get revived regularly; famous productions hardly ever. If you did not see Stephen Daldry’s production of An Inspector Calls first time round I strongly recommend you catch up with it now. Barbara Marten in An Inspector Calls

Daldry, who had made a name for himself on the Fringe, made his directorial debut at the National Theatre in 1992 with this highly original interpretation, brilliantly designed by Ian MacNeil.

There will be many who will want to see his version again. The old warhorse was given an amazing new lease of life with stunning surreal theatricality.

The play works perfectly well when it is produced in a normal straightforward fashion and set in a solidly furnished Edwardian room. Here the setting is a doll’s house on stilts, situated in a blitzed landscape. There is a spectacular coup de theatre when the whole fabric comes crashing down.

Daldry sets the action simultaneously in 1912 and in 1945, the year the play was written and the year of the general election, which led to a sensational landslide victory for Labour.

The Birlings are North Country Edwardian manufacturers, selfish, arrogant and rich, marrying into the aristocracy, and working with them for lower costs and higher prices. Refusing to accept responsibilities for their actions, they are confident that their world is going to last forever. It is a world soon to be shattered, firstly by the Titanic disaster and secondly by World War 1.

The Birling family is celebrating their daughter’s engagement when a detective arrives to tell them that a young woman has committed suicide.

An Inspector Calls, arguably, is the best murder mystery since Sophocles’ Oedipus. The tension comes from the total predictability of the plot.  It quickly becomes apparent that all four members of the family and the fiancé are responsible for her death.

But the play is so much more than a detective story. It is, in fact, a socialist tract on capitalist greed. The Inspector is the Birling’s conscience. He is also the playwright’s mouthpiece and Liam Brennan in the role confronts the audience directly in the play’s big speech:

We don’t live alone. We are members of one body. We are responsible for each other. And I tell you that the time will come when if men will not learn that lesson, they will be taught it in fire and blood and anguish.

The socialist message is hammered home, perhaps a bit too much, but the message, following hard on Brexit and Donald Trump’s Triumph in the USA, is as timely as ever

There are good performances from Clive Francis as Mr Birling, Carmela Corbett as his daughter and Barbara Marten as his wife.