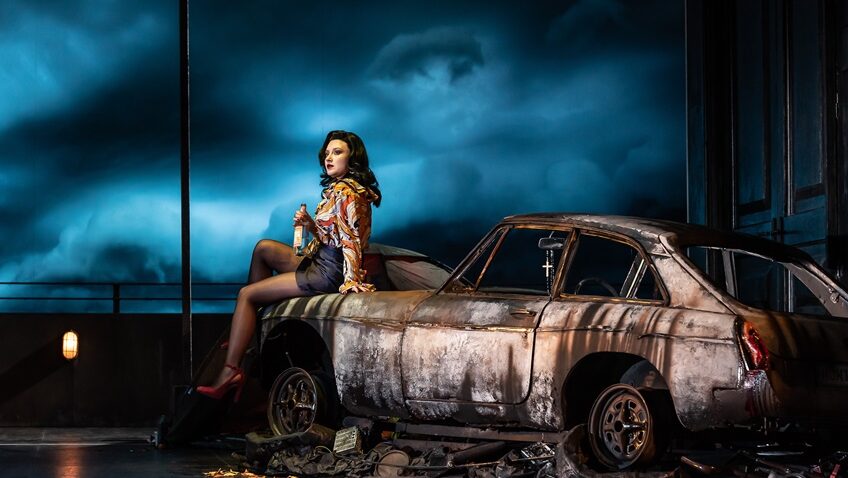 Rigoletto, one of 26 operas by Giuseppe Verdi, first took to the stage in 1851 and today rides high in the Top Ten most performed operas worldwide. The busy plot revolves around a mocked and maligned hunchback court jester and the daughter he’s desperate to protect. It was based on Le Roi s’Amuse, an 1832 play by Victor Hugo (whose 1831 novel also tells of the trials and tribulations of another scorned and rejected hunchback, Quasimodo.) Hugo’s play, though, because it highlighted immorality and debauchery at the French king’s court, was banned, so Verdi and librettist Piave renamed the characters and relocated the story to Italy in the 1600s.

Opera North’s 2022 production, the first opera that leading UK theatre artist Femi Elufowoju Jr has directed, relocates again, this time to a modern, UK, could-be-anywhere, non-specific location. More significantly, in Femi’s drama the central character, Rigoletto, now has no physical deformity whatsoever. Instead he towers up, hugely tall, strong, fit and handsome. It’s not his physical but his mental health that’s precarious and teetering. Already looked down on at court, he grows ever more distraught and paranoid, worrying his innocent daughter, Gilda, could so easily fall prey to the lascivious, womanising duke he works for and superficially cosies up to. And then she does! On top of that, Count Monterone puts a heavy curse on Rigoletto after he mocks and humiliates the Count for being cuckolded by the philandering, insatiable Duke, and the curse takes deep, destructive root in Rigoletto’s already troubled psyche.

This uniquely different take on the story still creates a thoroughly gripping, exciting, moving musical drama, enjoyable even to many who claim they still prefer a more traditional approach.

The opera’s most delicious ingredients remain the same, of course. Verdi’s mastery of rich, finely-tuned orchestral colour and his compelling flow of unflagging, melodic momentum grip the listener from start to finish as the music propels the passionate drama from bright frivolity into intense, ominous, dark, murderous moods or scenes of sublime tenderness, love and devotion. In Shakespearean style, the strong plot mixes comedy with grim tragedy in the lives of vibrant characters who display a range of universal human traits in negotiating their emotional journeys through their relationships with one another and with the world. Strong acting, fine singing and orchestral playing enhance the impact of universal truths concerning corruption, the abuse of power, sexism, inequality, vengeance, obsession, hate and love.

Costumes for the busy crowds of motley individuals who spring to life all over the stage are of a surreal mix-and-mash, too: from casual-scruffy and tarty to elegant, white-wigged, white-stockinged French nobles in silver; from modern police officers and a pizza man on a bike to African robes, hoodies, and kidnappers in red overalls and clown masks. The long-haired, gold-chain-bedecked, tattooed fellow is, of course, villain Sparafucile, mainly in black, the fine bass tones of Callum Thorpe ensuring the hired assassin sounds, as well as looks, menacing.

Soprano Jasmine Habersham is a delight as innocent, trusting Gilda, her tender, touching arias and duets with baritone Eric Greene as Rigoletto entirely evoking and holding the mood. The believability of the characters is, indeed, strong all round. While Eric Greene fully engrosses himself in portraying Rigoletto’s fluctuating emotions and distress, veteran bass-baritone Sir Willard White delivers Count Monterone’s strong curse with stern, deliberate African focus and authority, his stunning appearance in the final moments engendering a heart-stopping chill. Russian mezzo-soprano Alyona Abramova adds intriguing moments, too, as long-legged Maddelena, especially in the wonderful Act III quartet, while the tenor with the honour of delivering the show’s greatest tuneful hits, La Donna e Mobile and Questa o Quella, is Russian Roman Arnt as the over-sexed Duke of Mantua. Cavorting about court with an oversized, smiling portrait of himself, he may cause Douglas Reynholm, the womanising boss in The IT Crowd, to spring briefly to mind.

Director Femi Elufowoju Jr, who studied at Yorkshire’s prestigious Bretton Hall in the 80s (and survived training alongside the League of Gentlemen chaps), is proud (yet dismayed) to be the first black person to direct a major opera production like this at last, and with black singers in the main roles, too. His quirky production of Verdi’s exhilarating masterpiece, jam-packed with magical musical moments, is both captivating and moving.

The show continues at Leeds Grand until Feb 19th, then tours until April to The Lowry, Nottingham, Newcastle and Hull.