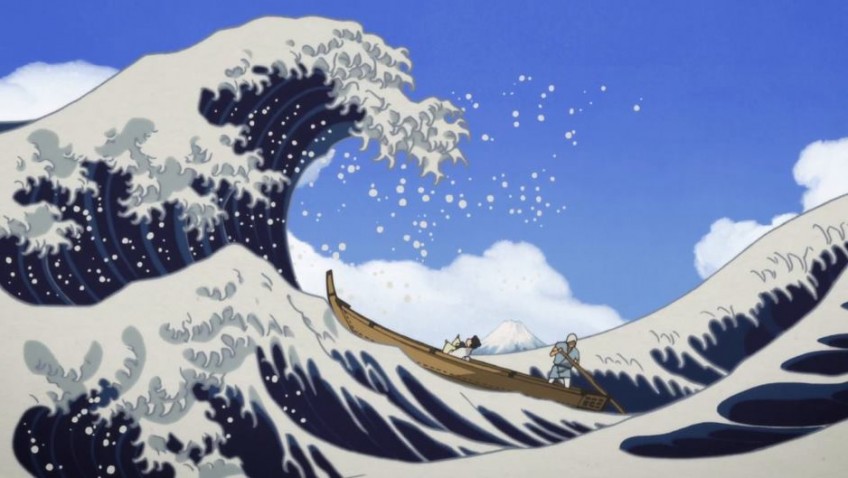 In 1814, as Napoleon was heading to exile on Elba and George IV was busy buying Rembrandts for the Royal Collection, Japanese artist Hokusai and his daughter, the titular Miss Hokusai, were putting the finishing touches on an oddly insecure looking dragon, resembling a big, coiled snake with several paw-like claws. 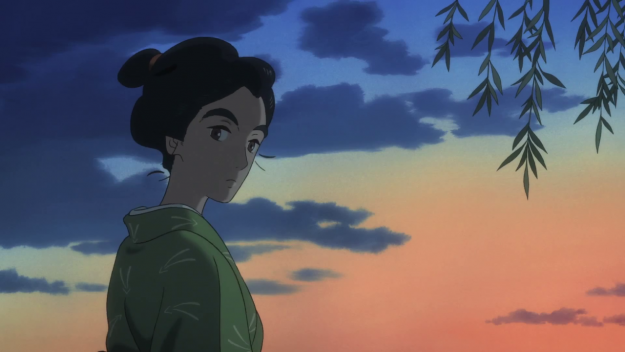 If the eponymous heroine’s name means anything to us, it is because Katsushika Hokusai’s woodblock print, The Great Wave off Kanagawa graces as many walls, museum gift shops, print shops, and refrigerator doors as the Mona Lisa.

Fittingly, Director ’s animated biopic Miss Hokusai, has a magical beauty of its own, as he captures the city life, the snow, the silence, the people and some of the beauty of Hokusai’s celebrated works from Japan’s late Edo period.

Why make a film about the artist’s daughter you might ask? Well, for starters, because, according to the late Hinako Sugiura’s manga Sarusuberi, the great Hokusai (who used many other names) had an unorthodox relationship with his two daughters from his second marriage.  (Hokusai’s two wives appear to have died young, but Hara shows him living apart from this long suffering second wife).

With the exception of a short-lived marriage, O-Ei (voiced by Anne Watanabe, another famous man’s – the actor Ken’s — talented daughter) was her father’s lifelong assistant, sleeping, eating and painting in his studio until he died of old age – and she disappeared.  In the film, Hokusai acknowledges his daughter’s superiority in portraying beautiful women, although in other aspects of her art he is harshly critical teacher.  O-Ei had a hand in painting not only part of her father’s output, but several entire works for which she is credited. 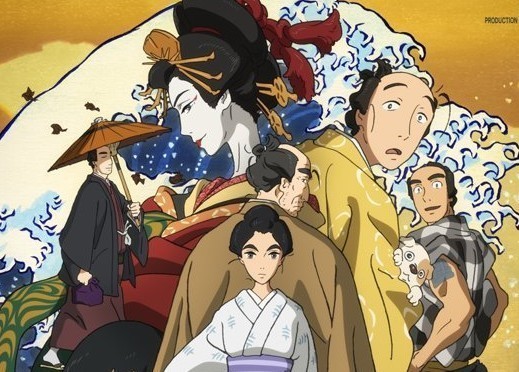 The film might bemuse viewers with the autobiographical details included.  The studio where the Hokusais’ painted and entertained Hokusai’s fellow painters and poets, was in a row of modest looking houses, almost unfurnished and littered with debris and papers. O-Ei slept on the floor in the same room as her father and his male friends who sometimes, after drinking, spent the night.

It is not what you’d expect from an artist in such demand who changed the face of Japanese art by incorporating landscapes and techniques of Dutch perspective into a traditional repertory of stylised portraits of courtesans and actors.  Apparently, though, neither father nor daughter liked to clean or cook and Japanese take-away was on the menu every night.  Moreover, Hokusai was so obsessed with perfecting his art that he took little interest in money, and apparently did not bother to open the envelopes containing his fee.  Presumably, this was another trait O-Ei inherited or learned.

Of O-Ei’s younger sister, O-Nao (Shion Shimizu), almost nothing is known except that she seems to have died young.  In Sugiura’s manga, a series of self-contained short stories, the little girl is blind and neglected by her father.  We are left to imagine whether this attitude was because of some kind of guilt or because, as someone who sees the world visually in colour, he cannot bear thinking about the idea of blindness. 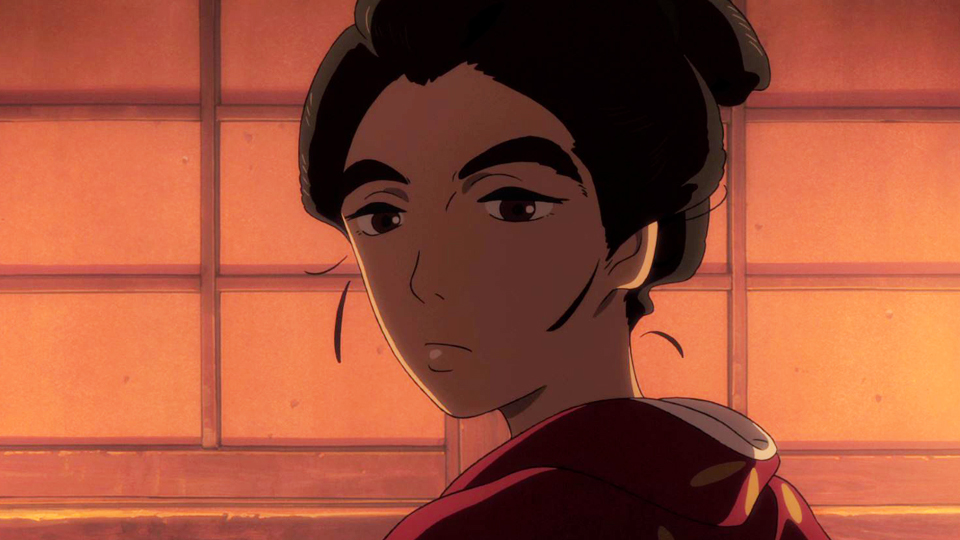 While Keiichi Hara and script writer try to weave a narrative through Sugiura’s unconnected stories, the film remains episodic, depriving it of any dramatic propulsion or tension.  Hara includes some dream sequences that are left unexplained and do not add anything by way of narrative structure.

But Hara compensates for these shortcomings when he and scriptwriter Miho Maruo introduce two original scenes into the film that are not part of the manga.  In the first, the two sisters stand on a magnificent bridge over the city’s river with O-Ei describing the picturesque scene to her sister. Along comes a handsome suitor, a friend of her father’s, and little O-Nao can sense the sexual attraction between the two without seeing a thing. In arguably the film’s most breathtaking sequence,  O-Ei and O-Nao stop off at a restaurant when it begins to snow.

O-Nao goes off on her own to play in the snow and encounters a little boy who joins her, not realising at first that she is blind.  O-Nao’s laughter and her natural contact with the young boy, perhaps her first, is as moving as it is beautiful.

If you go to the Royal Academy’s new exhibition on Painting the Modern Garden, you will see Hokusai’s influence on many artists of the second half of the 19th century, in particular on Monet whose large collection of Japanese art included many Hokusai prints.  If the film is full of flowers it is perhaps because one of Hokusai’s contributions to Monet’s art was the realisation that you do not need landscape or people to make flowers beautiful.

Feast your eyes on his astonishing painting of a riot of colourful heads of chrysanthemums, or his famous waterlilies that float alone without perspective between a sky and a reflecting pond that are indistinguishable.