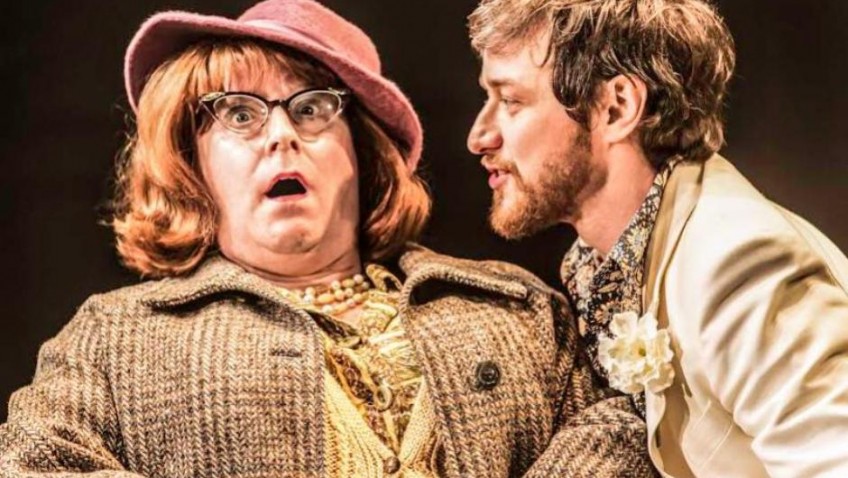 The 14th Earl of Guernsey thinks he is God. How does he know he is God? “When I pray,” he says, “I find I am talking to myself.” He also thinks he is Jesus Christ and is liable to mount a cross in the baronial home.

His family wants his inheritance; so they decide to marry him off to a woman whom he thinks is Marguerite Gautier. The hope is he will have a child who can inherit the inheritance and they can then have him certified as insane and locked up permanently.

In the second act the earl seems to regain his sanity only to turn into Jack the Ripper.

Peter Barnes’s play began life at the Nottingham Playhouse in 1968 and then transferred to the West End. It was panned by most critics.

The film version, made in 1972, had some famous names: Peter O’Toole, Alistair Sim, Harry Andrews, Coral Browne, Arthur Lowe.  It, too, got terrible reviews and was a commercial failure.

Jamie Lloyd’s revival has the advantage (a definite plus) of the charismatic and wonderfully extrovert James McAvoy in the lead role and a good cast, which includes Anthony O’Donnell (butler), Ron Cook (lord) and Joshua McGuire (toff), but they can’t make the play any better than it is.

The Ruling Class is a crude mixture of Gothic melodrama, black comedy, song and dance, opera, the Eton Boating Song and blasphemy, lots and lots of blasphemy.

It’s an unholy, messy extravaganza, which goes on for far too long; and as for Barnes’s satire on the aristocracy and its arrogance and condescension, it was terribly old hat in 1968.

Has anybody thought of reviving Barnes’s Leonardo’s Last Supper, a much better play?