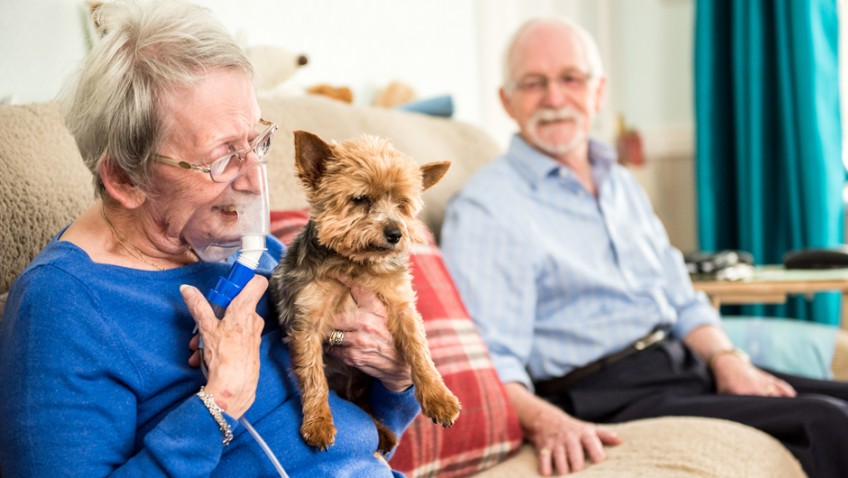 COPD is the name used to describe a number of conditions, including emphysema and chronic bronchitis. COPD is a condition where the airways become inflamed and the air sacs in the lungs are damaged. This causes airways to become narrower, which makes it harder to breathe in and out. Therefore, people with COPD have breathing difficulties, and this can affect many aspects of their day-to-day life.

Dr Penny Woods, Chief Executive of the British Lung Foundation, says: “COPD isn’t just a smokers’ disease. People with long-term asthma, or those exposed to air pollution and fumes are also vulnerable – that could be anyone.”

The BLF is encouraging anyone who gets out of breath doing everyday tasks, such as walking upstairs, to take their lung health seriously. The charity has set up a simple online breath test on its website: www.blf.org.uk/breathtest and wants people to take the test and if advised to, seek advice from their GP.

It is also calling on the government to set up a respiratory taskforce to develop a new five-year strategy to improve lung health.

World COPD Day will be used to raise awareness of other possible symptoms, such as having a cough that lasts a long time, wheezing in cold weather, and producing more mucus or phlegm than usual.

The BLF has more than 230 Breathe Easy support groups throughout the UK, designed to help people with COPD, and other lung diseases, to make new friends and to learn more about living with a lung condition. Groups are run by their members and meet regularly.

The Charity is also ‘singing for lung health’. Music and other creative activities can make you feel more positive and healthier. There’s increasing evidence that singing regularly as part of a group is good for general health and wellbeing, especially for those with a lung condition.

John Price was diagnosed with asthma in 1942, when he was just 6 months old. Later in life he developed COPD.

For the last 16 years, he’s been chair of a Breathe Easy support group.

Socialising is fine. But when the BLF asked him to help set up a singing group, John had reservations.

He says: “I can’t sing. But I soon found out that singing could actually help people with lung conditions. So I decided to move past my doubts, and give it a go.” The singing group is led by a music therapist Mary Anne Barclay, who explains:

“Each session starts with some breathing and singing exercises. Some of these involve making funny faces and funny noises – it’s a good icebreaker, especially if there are new members.

“That is followed by 30 minutes of singing together. The most important thing is to improve the participants’ health – they all have lung conditions – whilst making sure they have a good time.”

John says: “We look forward to it. The singing and the socialising have helped our health. There’s a camaraderie, and it brings back memories of songs I’d forgotten.

“I always feel better afterwards. I think everybody does – and that’s reflected in the increase in numbers attending since we first started.