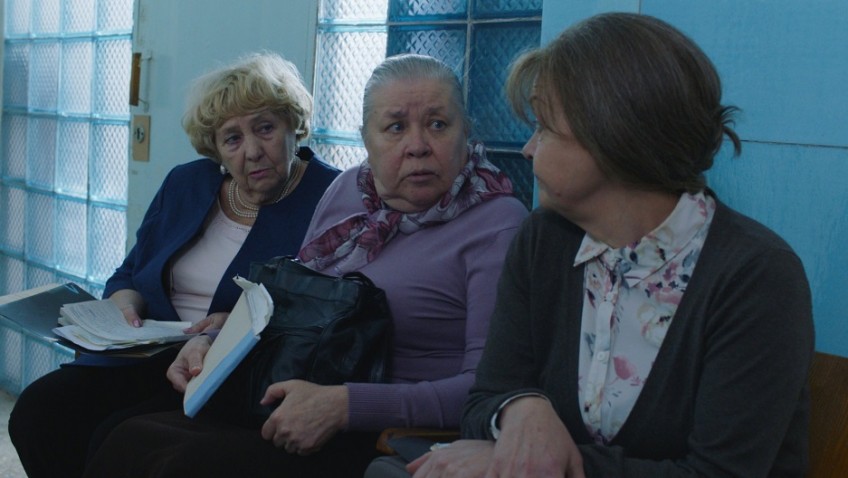 The London Film Festival (LFF) opens on 5 October and, as last year, I recommend that, unless you are a star gazer, you save yourself the premium prices of gala films for these, and even the films in Official Competition, be given wider releases in the coming year – and reviewed on the Mature Times website.

To make a more adventurous selection, pick up the catalogue or go online bfi.org.uk/lff, although finding films is not that easy.  The writing in the catalogue index is tiny and hard to read (in faded grey and red) while the BFI has continued to organise the 380 features and shorts with subjective and annoying strands:  Love, Debate, Laugh, Dare, Thrill, Cult, Journey, Sonic, Family, Treasures and Experimenta.

The Festival Opens on 5 October with A United Kingdom by director Amma Asante, signalling the BFI’s commitment to showcasing films by black directors with black actors, and female directors.  Whether this is a defiant response to the accusations aimed unfairly at last year’s Academy Awards is irrelevant, as these films are welcome additions to the Festival. Like Asante’s previous film Belle, A United Kingdom, is a historical biopic and a pedestrian account of a captivating, moving love story.  In 1948, the King of Kechuanaland (modern Botswana),played by the gifted actor David Oyelowa (Selma), married a white British office worker Ruth Williams (Rosamund Pike) in the most politically opposed wedding of that decade. This is a perfect 50th anniversary gift from the UK (which co-funded the film) to the independent democracy of Botswana.

Without question one of the most moving and beautiful films of the festival is also from a black director and features a cast of several unknown black actors. In Writer/Director Barry Jenkins’ (Medicine for Melancholy) coming-of-age film Moonlight, three different actors play the film’s protagonist starting in 1980s Miami. Jenkins dishes out clichés about black people only to subvert them in this beguiling exploration of masculinity and the painful yearning of the human of the heart.

In 1948, while Sir Seretse Khama and Ruth Williams’ marriage was causing political upheaval, another, unnoticed romance was quietly blossoming between Paul Celan, the poet and concentration camp survivor, and fellow writer Ingeborg Bachmann, whose father was a Nazi. They only met one time after this, but their 20 year epistolary romance (both died in their late 40s) is the subject of The Dreamed One, a German documentary/essay film.

The following films will appeal to the over 50s on their quality alone, but others might  have particular appeal due to the subject matter, the period and setting and/or the chance to see some older actors and the work of older directors and writers. Leading the list is Ethel & Ernest, the prodigiously talented book writer/illustrator Raymond Briggs’ account of the ordinary lives of his late parents, from their marriage in 1928 through the war years in London, to the shock of learning that their son, who had been accorded a place at a grammar school, was quitting to go to art school.

Ethel was a lady’s maid in her mid thirties when she met milkman Ernest after he rode by her window and waved at her one day. Ethel is a conservative, and, ironically, a bit of a social snob with little interest in current affairs.

Ernest, proud to be working class, takes an interest in current affairs and the latest technology (Ethel jumps in fright when their phone rings for the first time). With a mortgage of £800 they both fix up their three story London home, although Raymond is their only child.

Conveniently, Ernest reads the paper every day and it is these headlines that move the film forward from year to year, decade to decade.The animation is so evocative that this very personal film (based on a graphic novel) becomes the story of the nation and a tribute to our own ordinary, hardworking parents.

The ever-inventive and compelling actress Isabelle Huppert is proving to be at the vanguard of films for and about women over 60, raising the profile of this often ignored segment of society. Continuing on from last month’s Things to Come is Bavo Defurne’s Souvenir a film less about the past than the title suggests. Huppert plays a factory worker with a secret past and a lingering dream.  A muscle-bound younger colleague at the factory recognises her and, whether it’s an imagined replay of Sunset Boulevard or something healthier, the two begin an intergenerational affair.

In 2012, Huppert starred in In Another Country, in which the South Korean actress Youn Yuh-jung played a mother in hiding from debtors with her daughter who imagines the character Huppert plays.  Now, 69, Youn Yuh-jung stars in the dark South Korean comedy, The Bacchus Lady which, like Souvenir, is determined to change attitudes about sexagenarian women while tackling a few other social issues. The eponymous woman is not an invisible factory worker, but an invisible sex worker, soliciting older men in parks with the Bacchus energy drink, a suspect, if more exotic form of Viagra.
Jean-Pierre Léaud, once the symbol of French youth, France’s New Wave cinema and Francois Truffaut’s muse (400 Blows, Stolen Kisses) is now 72 and plays the eponymous King in Albert Serra’s The Death of Louis XIV.  But this portrait of the twilight of the Sun King, is, not only an iconic actor’s exploration of death, but like Shelley’s poem Ozymandias, a reflexion on the vanity of monuments and immortal trappings.

Hilarious, piercingly sharp and bitter sweet, Ivan I Tverdovsky’s Zoology is a satirical and metaphorical reflection on the plight of the middle-aged woman and what it is to be different in Russia today.  Natasha (a superb performance from Natalia Pavlenkova), is a bit overweight and plain.  She has never married, does not date and still lives with her mother.  Her only friends appear to be the animals at the zoo. Bullied at work (an ingenious satire on office politics everywhere) and fed up with the Russian National Health Service, she befriends a kind young and good looking radiologist who shows an unexpected interest in his new patient’s abnormal growth. Arguably the greatest American scriptwriter of the 1970s and 1980s (The Yakuza, Taxi Driver, Raging Bull, American Gigolo, Mosquito Coast, The Last Temptation of Christ), Paul Schrader is also a talented director (American Gigolo, Blue Collar, The Comfort of Strangers). Now aged 70, he is reunited with old friends Willem Dafoe (61) and Nicolas Cage (52) – co-stars in David Lynch’s Wild at Heart – in Dog Eat Dog, based on a novel by career criminal Edward Bunker, the model for Quentin Tarantino’s Mr Blue.

Schrader who wrote and directed Hardcore and, more recently, Auto-focus (starring Willem Dafoe), has never been one for the squeamish, but no film buff will want to miss the chance to see these three American talents acting together in a botched kidnapping caper.

Floridians over 50 are still haunted by the 1974 on-air suicide of television anchor and news broadcaster Christine Chubbuck. The incident has been made into a feature film, Christine, starring Rebecca Hall, daughter of the great theatre director, Sir Peter Hall, and American opera performer Maria Ewing. If Chubbuck felt she was a disappointment to her mother (J Smith Cameron, excellent), Hall’s performance in Antonio Campos’s tragedy of a career lost to mental illness is one that Hall’s parents will be proud of.

By an intriguing coincidence, the LFF is also showing Robert Greene’s documentary Kate Plays Christine in which the House of Cards actress Kate Lyn Sheil grapples with the daunting task of portraying the troubled Chubbuck. Rebecca Hall, who has already gone through the process, may be in the audience. Taraneh Alidoosti and Shahab Hosseini in The Salesman

Another film in which reality and acting blur is The Salesman, the internationally acclaimed Iranian director (A Separation and The Past) Asghar Farhadi’s new film. During rehearsals of Arthur Miller’s Death of a Salesman, an acting couple move into an empty apartment with unexpected consequences.

J Smith Cameron, who plays the broken-hearted mother in Christine, is married to the great playwright (This is our Youth) Kenneth Lonergan.

Lonergan has only made two feature films, but both You Can Count on Me and Margaret were so brilliant that a third feature can only be a cause for celebration. Manchester by the Sea, starring Casey Affleck and Michelle Williams, is showing on three occasions in the festival.

Other high profile filmmakers back with another promising film include Tom Ford, the American fashion designer-turned-writer/director with the superb A Single Man. He returns with a dazzling all star cast for Nocturnal Animals in which a wealthy gallery owner’s insomnia is fuelled by a riveting unpublished novel sent to her by its author — her ex-husband.

Young Damien Chazelle’s second feature Whiplash received 5 Oscar nominations and his third feature, La La Land, starring the two great actors, Emma Stone and Ryan Gosling, received rave reviews at the Venice and Toronto Film Festival. The film has a lot more in common with The Artist and Hail Caesar!, tributes to the golden ages of Hollywood, than to the anguished contemporary drama Whiplash.

Speaking of golden-oldies, do not forget that the Festival is offering a tantalising choice of oldies including the only film directed by Marlon Brando (in which he co-stars) One-Eyed Jacks; John Huston’s Beat the Devil with Bogart, Jennifer Jones and Gina Lollobrigida; Woody Allen’s masterpiece, Manhattan, and Leslie Stevens’ long lost film noir, Private Property.