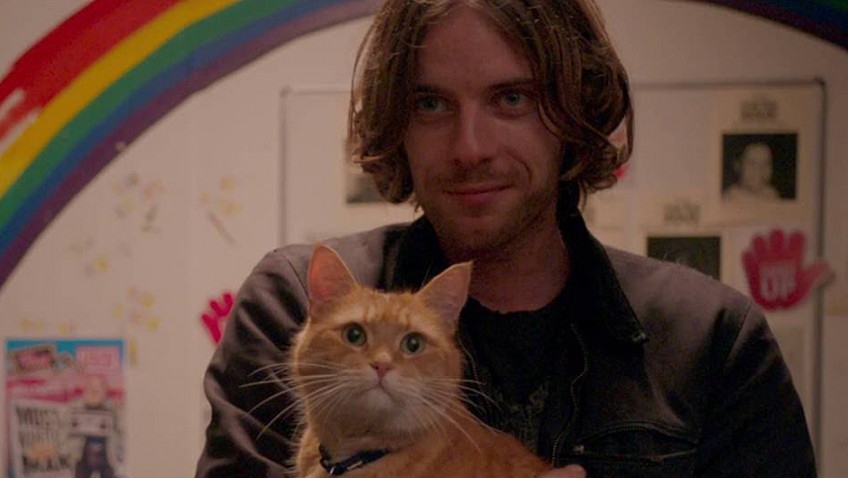 A fuzzy tale of cat and man, rags to riches

A Street Cat Named Bob is clearly aimed at fans of James Bowen’s books and of Bob, his ginger cat, who co-stars as himself (along with some five stunt doubles).  Luke Treadaway, best known for his role in the Curious Incident of the Dog in the Night, is well cast as James in this sanitized and embellished adaptation of A Street Cat Named Bob. Even if you haven’t read the books, James and his stray cat turned-best-friend Bob have been on the cover of the Islington Tribune (‘a nice human interest story,’ says the reporter in the film); have gone viral on social networks and have appeared on the media circuit.

James Bowen is a homeless junkie who busks at Covent Garden, singing songs he has written with his guitar.  He does not have the talent to be discovered and he’s lucky to find more than loose change in his case.  This means James forages in the rubbish bins for food.  He is a heroin addict, altlhough, as he tells Baz (Darren Evans), a fellow junkie straight out of central casting, he is trying to get clean on methadone.  That said, James lapses when he is lured into a warm car on a dark, rainy night.  But the film mercifully spares us James’ ten years on the streets for his life is about to change, for this is what you call an uplifting film.

The first change is that his drug support worker, Val, (Joanne Froggatt, so great in last week’s release, Starfish) has helped James jump the queue of single mothers to get a depressingly run-down, but spacious flat in Tottenham in exchange for a promise to stay on the programme. The second change is that a stray cat crawls through his window. He can’t get rid of the cat or find its owner.

When the cat is wounded in a cat fight, James asks for help and the first person he comes across is Betty, or Belle (Ruta Gedmintas).  Coincidentally, she works in a veterinary surgery, and, coincidentally, she had a brother roughly James’ age who died of an overdose.  She seems to be a fortune teller, too, and tells James that Bob is the cat’s name and he was sent to James for a purpose.  Did I mention that Belle is a tall, thin, beautiful animal-loving vegetarian and, it seems, a fictitious character?

While James does not tell Belle he is a recovering junkie, he does tell her (and us) that he went off the rails when his parents divorced and he was taken with his mother to Australia.  James’ father (Anthony Head) now has a particularly obnoxious second family in the London suburbs and, while he does not at first admit it, he is feeling very guilty about how he abandoned his son.   When James bumps into this father, he stuffs cash into his hand and rushes off with some excuse.  It is this cash that James uses to pay for the vet.

This self-sacrifice shows that James is a caring person and gives James an ‘interest’ in the cat. But the bond is sealed when Bob follows him to ‘work’ on the 73 bus and delights the crowds to such an extent that they drop fivers into his guitar case.

The two rough sleepers, man and beast, are united in a mutually beneficial financial arrangement that grows into something so much more! A passer-by just happens to be a publisher and, when her assistant brings in clippings of James and Bob, this publisher is as clairvoyant as Belle. She instantly envisages a book – or series of books – and, you might be thinking, maybe even this film.

Even if 71-year-old  dog-loving director Roger Spottiswoode’s (The Journey Home, Turner & Hooch, Tomorrow Never Dies) film has held your interest, which it will; and you laughed at the tiger mother who wants to buy Bob for her son; and cooed at the cat-lover who knits Bob a tie; you might wonder how his story could fill one book, let alone a series.

The film does not actually show us how Bob changed James’ life, except to increase his tips, but we understand, in this day of Instagrams, Facebook, Twitter and selfies, how the rather trivial novelty of a cute cat on a busker’s shoulders could grow into a story that would fuel its own flames.   Celebrity comes at a price, as James discovers in a series of frustrating incidents that, along with a spat with Belle, leave him alone and starving, and stretch the film to 103 minutes.

In the final scene at the big book launch, you start to wonder about the nature of fame.  Phiona Mutesi (The Queen of Katwe), gains limited fame for overcoming poverty and illiteracy in the slums of Kampala to become Uganda’s first woman chess master at age 16.  A film (He Named Me Malala) was also made of Malala Yousafzai.  Shot in the head by the Taliban for campaigning for female education, she became the first Pakistani to be awarded the Nobel Peace Prize, an honour she added to a long list of awards at age 17.

James is not famous for kicking the heroin habit with the help of the taxpayer; nor is he famous as a singer-songwriter. Luke Treadaway does the singing and the songs used are not James’s.   Nor is James famous as a writer as the book has a ghost writer. James is famous for begging with a beautifully groomed cat (as opposed to the dozens of dogs we see with many homeless people).

Millions of people have found this warm and endearing relationship sufficient and, with the proceeds of the book, we are told in a caption, James and Bob have bought themselves a house.  We’ll have to wait for the sequel to see what they do with royalties from the film.