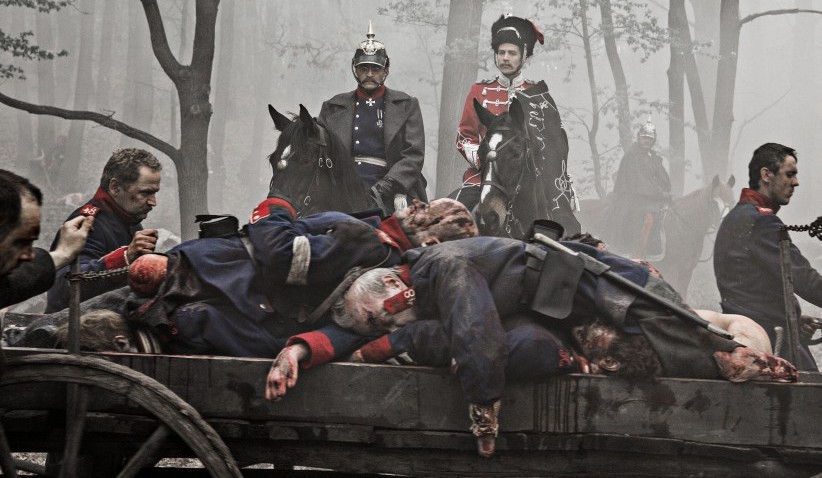 1864 (Arrow) The Danes spent a fortune on this television epic and were much criticized for doing so in their own country. The 8-episode series is a magnificent anti-war statement. The author and director is Ole Bornedal and he views the events from a modern perspective and gives the history a tremendous sweep.

1864 is the year the outnumbered Danes made war on the Prussians and Austrians and suffered a disastrous and humiliating defeat. 5,000 men lost their lives. “Is this war or slaughter?” asked one general. It was sheer nationalistic madness. The Danes lost one third of their territory. They also lost their appetite for war.

There is no such thing as a merciful war and the battle scenes are often harrowing. The best soldiers are the ones who already see themselves dead. There are no heroics, only fear. The soldiers merely obey orders and are at the mercy of old and gaga generals and a government led by a mad Bishop (Nicolas Bro).

The battles are told through the affecting story of two brothers (Jakob Oftebro and Jens Saetter-Lassen) and their love for the same girl (Marie Tourell Soderberg). There are also notable performances from Pilou Asbaek as a dee/ply disturbed brute and Soren Malling as a psychic.

WITHOUT  PITY (Network). 1948 Italian neo-realism, with a script by Fellini and directed by Alberto Lattueda, is set in post-World War 2 Italy when life was hard. An African-American GI deserter (John Kitzmiller), a good guy, and a reluctant Italian prostitute (Caria DelPaggio), a good girl, fall in love. The Americans found the relationship totally unacceptable, even though the couple do not have sex, and banned the film in the US.

Incidentally, many American soldiers preferred to desert after the war and not return to the US. Kitzmiller, who had served in the army, was one of them. He decided to make his acting career in Italy. Pierre Claude is the black-market racketeer. Giulettte Masina makes an instant impression in her first film role.

TRASH (Universal) is an exciting adventure story with lots of pace and authenticity and at the same time a first rate exposure of police brutality and political corruption in Brazil. Three 14-year-old boys, living in the slums, survive by making a living out of foraging in rubbish. Street children in Brazil are liable to be killed by the police. Stephen Daldry, who is always good with child actors (viz Billy Elliot, film and stage musical), directs and gets amazing performances out of the boys, who are non-professional actors. They improvised their dialogue; and it is their energy and good humour which carry the film. On the basis of what we see here Rickson Tevez and Eduardo Luis look as if they might be able to turn professional. The feel-good ending (too good to feel true) is actually what the young actors wanted. It was their story and they wanted it to end happily.