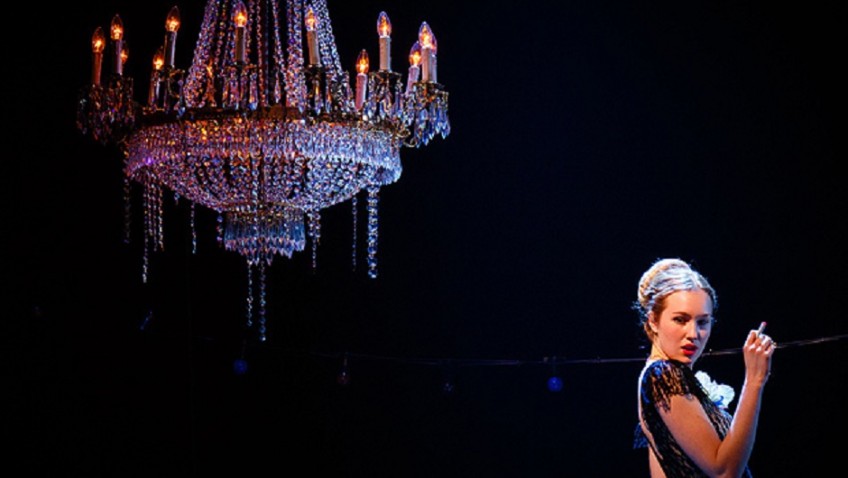 Written in 1938, Daphne Du Maurier’s Rebecca is a gripping mystery full of nail-biting, subtly played drama and suspense. Ditto Hitchcock’s classic film of 1940 with Laurence Olivier and Joan Fontaine. So what about Kneehigh Theatre’s less traditional approach to the story, adapted for stage and directed by Emma Rice? Well, the words bizarre and bonkers might spring to mind, along with hotchpotch. Still, if what takes your fancy is Rebecca meets Monty Python in a bad dream, doing panto at the Rocky Horror Picture Show, it might be just the job.

A ripped leather armchair sits centre-stage, beside a wooden rowing boat. Behind the jetty, the jagged, broken banisters of a once grand stairway, rising up toward the dilapidated interior walls and single chandelier of a once grand mansion. Mists pump relentlessly onto Cornish beach and into nightmarish house alike (words on cloths held aloft to tell us, to comic effect, where we are – and when). Enter, at all levels, overblown caricatures and loud-voiced melodrama to mix and mis-match with elements of pantomime, puppetry, dance musical and folk club.

Yes, the musicianship of the cast is excellent as, dressed sometimes as lantern-bearing fishermen in sou’westers or in work suits and cloth caps (with Mr de Winter in overcoat and cap on double bass), they break into harmonised bursts ofSally Free and Easy, Leave Her, Johnny, or Let’s Face the Music and Dance or provide incidental music with shimmering violin or vibrating marimba in hopeful attempts to create tension.

Yes, the puppets get laughs. The cormorants on sticks are admirable, while Jasper, crotch-sniffing mongrel cousin to Scooby-Doo, goes down a treat – at least with slices of the audience – and so does comic turn Robert, a slight, highly nimble servant boy (Katy Owen), full of Welsh patter and absurd silliness. Meanwhile, Maxim de Winter’s sister Bea and husband Giles form a bouncy, rumbustious, randy pair of buffoons, their caricatures played entirely for laughs with even a Wilson, Keppel and Betty sand dance skit thrown in with young Robert.

By interweaving all these disparate elements, on any rare occasion tension and suspense do find enough space to start to build, they’re quickly cut short, frustratingly, annoyingly, by yet another comic turn or rousing chorus as all gets busy, busy once again. At the big finale to Act I,  as the new Mrs de Winter appears, of course, on the dilapidated staircase, Maxim, briefly roused from his habitual glazed coma, yells,‘ Well, what are you all staring at?’ The answer is obvious. Forget Rebecca! It’s madam’s beautiful bare bottom, resplendent in see-through black lace!

There’s little believability in the characters and their relationships while, with language and attitudes needlessly updated, baddy Jack Favell gets to call Maxim a heartless s**t as well as telling him to f*** off. More frightening still, at the end of the piece, the new Mrs de Winter (trembling simpleton at the outset rather than diffident innocent) now seems to transform into the same obnoxious tyrant Rebecca was before her. As she disappears in a blinding flash we can only hope it’s self-combustion.

With no consistency of mood or genre, it’s hard for this hybrid to gel as a thriller. If you’re not expecting a comic romp, you might well be left dazed and bemused. It’s not so much the study in jealousy as Du Maurier wrote it, nor a proper spoof, but more a study in pointless innovation. That said, a fair few folk do seem to think this entertainment is the cat’s whiskers rather than a puppet dog’s dodgy dangly bits.

The show travels next to Southampton