Home / LIFESTYLE / Eden is a Garden 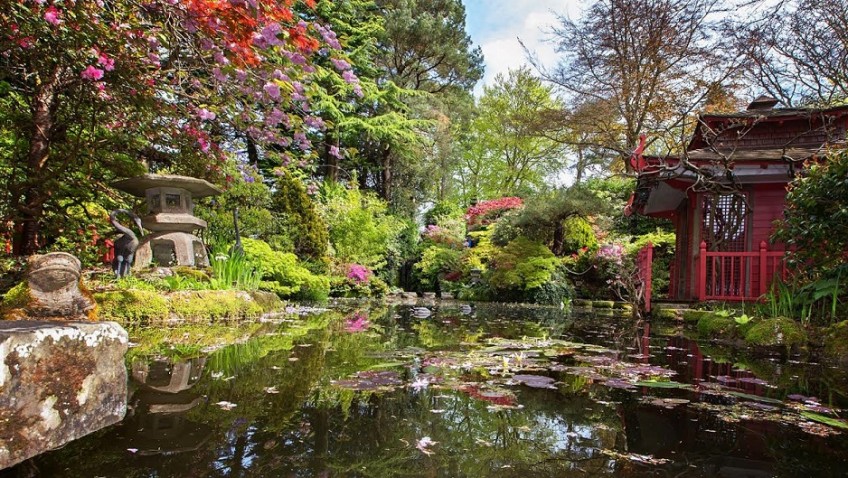 Eden is a Garden

Visit England has designated 2016 as the Year of the English garden so in the early summer sunshine I took some of my family to Compton Acres Gardens situated on the edge of Poole Harbour in Dorset.

Famous for being the South’s finest privately owned gardens it has undergone extensive refurbishment in the past 10 years.  The 10-acre site has a series of themed gardens which lead from one to the other on a circular route, rather like jewels on a necklace.  There are options for the less able-bodied to miss out many of the steps and plenty of seating for those who want to rest or just enjoy the tranquility.

Starting in the Italian garden with its Roman courtyard and grotto the grand formal area with its rectangular pond linear planting and statues you move into the wilder sub-tropical area and then into the wooded valley.  We were treated to the spendour of brilliant rhododendrons and azaleas and waterfalls thundering into bosky pools along the deep sided valley trail.

From the largest rock garden in private ownership with its and bridges and fish filled ponds to the café perched overlooking the vista of pool harbour this is a place to relax and wonder at the clever planting, intriguing sculptures and scented blossoms.  The highlight of the tour for us was the Japanese gardens which is recognised as the finest in Britain and a place to step carefully over the stones across the lake. Admire the wisteria fronded pavilion and marvel at the hug the koi carp gliding through the lily covered pool and image yourself in the land of the Rising Sun.  We were so lucky in that the sun shone all day for us and added to our enjoyment of a must-visit garden.

To be fair geographically I also visited earlier in the month, a garden in Wales that deserves a special mention. Bodnant Gardens in North Wales is owned and run by The National Trust and is one of the most beautiful gardens in the UK, spanning some 80 acres and is situated above the River Conwy on ground sloping towards the west and looking across the valley towards the Snowdonia range. Bodnant Garden, Clwyd, Wales. Bodnant is a breathtaking garden with grand terraces and views of Snowdonia.

The Garden has two parts. The upper garden around Bodnant Hall consists of the terraced gardens and informal lawns shaded by trees.

The lower portion, known as the “Dell” is formed by the valley of the River Hiraethlyn and contains the Wild garden. Wide tree rimmed lawns give a feeling of space with hidden areas and shady paths leading to peaceful and contemplative nooks

An endeavour has been made at Bodnant Garden to grow a wide range of interesting and beautiful plants from all over the world, particularly China, North America, Europe and Japan that are suited to the Welsh climate and soil. As well as this, care has been taken to place the plants in such a way that they enhance each other and contribute to the general beauty of the garden throughout the seasons.

National Trust Wales has revealed its vision for the next stage of Bodnant Garden’s ongoing restoration. Penjerrick Walk will be a rare floral showstopper just as impressive as its famous Laburnum Arch.

The 100-metre-long, Penjerrick Walk is a recreation of the avenue of creamy white hybrid Rhododendron ‘Penjerrick’ that was originally planted by Henry McLaren.  It is due to open in the spring of 2017 and is a date for my diary.

The joy that visiting these two very different gardens has brought is further enhanced by the delight in meeting and talking with the many others who sat and smiled among the flowers shrubs and green alcoves.

It is true that “You’re closer to God’s heart in a garden than any place else on earth.”