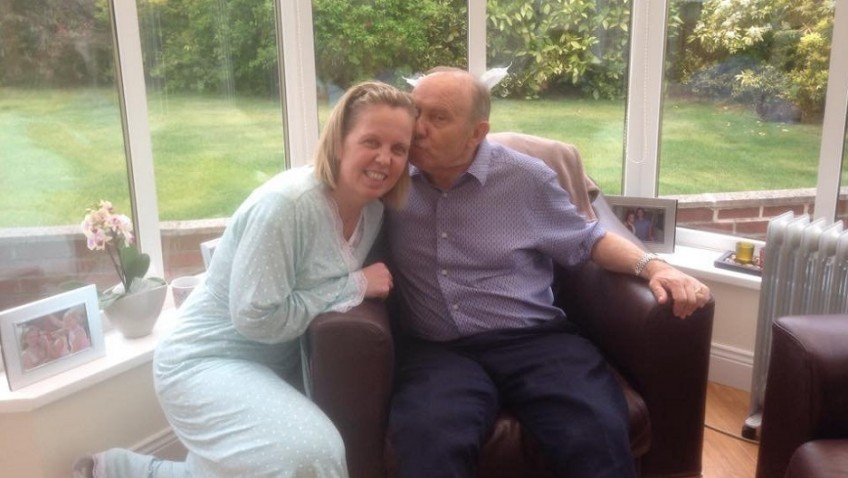 A daughter has told how she donated a kidney to her beloved dad – so he could walk her down the aisle.

Devoted Vanessa Callaghan said she felt honoured to be able to give her dad the gift of life and even joined Weightwatchers to make sure she was in the best shape possible before the surgery.

Selfless Vanessa, 45, added: “I would have done anything to save him.”

The transplant has given the pair the chance to share a much happier moment later this year – when John gives Vanessa away at her wedding to partner Kevin Reed, 46, in September.

Now the couple hope their story will inspire more people to talk about organ donation and sign up for the National Health Service’s register.

Dad-of-four John, 67, only found out about 15 years ago that he had been born with defective kidneys, but the condition didn’t cause him too many problems until the organs started to deteriorate rapidly a couple of years ago.

Then, when doctors broke the news to him that a transplant was needed, Vanessa was found to be the best match.

Mum-of-one Vanessa was determined that nothing would stand in her way of donating a kidney and even shed three stone, to be in the best physical condition possible to undergo surgery.

Brave Vanessa, of Sunderland, Tyne and Wear, faced a long and gruelling process of tests and assessments before medics gave the go-ahead for the surgery – but that didn’t phase her.

She said: “l just went through it all because he is my dad, and I would have done anything to save him.

“I have friends who have lost parents to illnesses they couldn’t do anything about, so I felt really honoured to have the chance to give my dad extra time.

“There are no guarantees it would work, but if I had never given my dad the opportunity, I would never have forgiven myself.

“Even though I was in pain and discomfort, I would do it all again tomorrow.”

Thankfully, the transplant was a success and John, who has 11 grandchildren, is now fighting fit and back working for a chemical company.

John, of Cleadon, Tyne and Wear, said: “It was amazing. I was back sitting up in bed the next day already feeling better and was out of hospital in a week.

“Straight away, Vanessa said she wanted to be the one to do it and she remained so positive throughout. She certainly saved my life.

“Other people are not as lucky as me to have someone who is such a good match willing to donate an organ, and many spend up to three years waiting.

“There is a big shortage of organs, and we are keen to encourage more people to become donors.”

Vanessa added: ”I could not have done this without the support of my family and friends.

“Last year, it was all about the transplant, but we have a lot more to look forward to this year.”

With the help of her fellow members at her WeightWatchers’ group, Vanessa says she intends to keep fit and healthy to live as well as she can with her remaining kidney.

To find out more about organ donation or to register, visit www.organdonation.nhs.uk