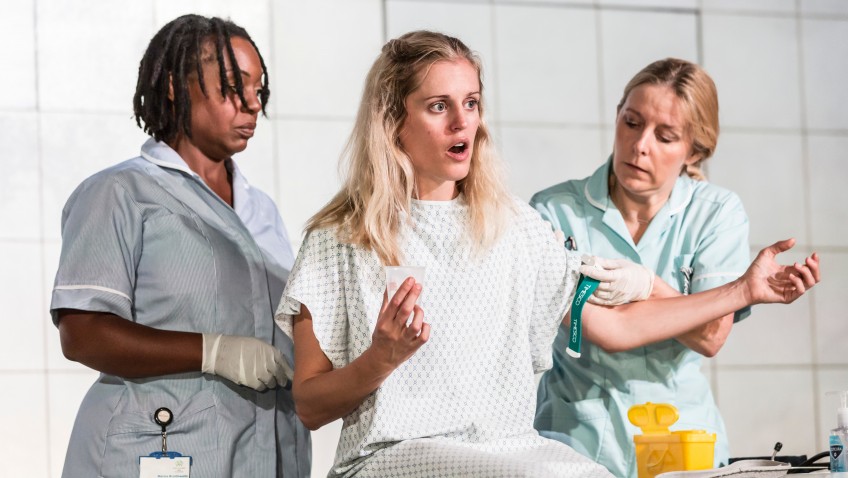 Denial is what kills the alcoholic and drug addict

Duncan Macmillan writes about addiction and the good work being done by the AA to help addicts to recover.  Most of the action takes place in a rehab centre and follows their 12-step programme.

Jeremy Herrin’s traverse production, set under a huge white tiled arch, is a collaboration between Headlong and the National Theatre and, because of its distressing subject matter, some audiences may not find it always easy to watch.

The script has a sharp documentary feel to it and concentrates on one particular woman, who is seriously ill but in denial that she has a problem.  “Denial is what kills you,” warns the therapist.

The woman is an actress by profession and it is only when she in the character of somebody else that she comes alive.  Acting gives her the same kick that drugs and alcohol do.

The opening scene shows her on stage in a fringe theatre, clearly ill, and playing Nina in Chekhov’s The Seagull very badly.

She is a compulsive liar and thinks herself intellectually superior to her therapist because the therapist believes in God.  Arrogant and constantly hostile, she despises group therapy and takes a long time to admit that her life is unmanageable.

Her hallucinations are cleverly recreated by Jeremy Herrin when he fills the stage with more and women and they are all dressed and made-up to look like her.

Denis Gough, as the insular and self-absorbed addict, gives an amazing performance. On stage all the time, the role is an overwhelming experience; emotionally draining, it visibly takes its toll.

Gough is given valuable support by Barbara Marten inn three roles, as doctor, therapist and mum, and by Nathaniel Martello-White as a fellow addict who befriends her.