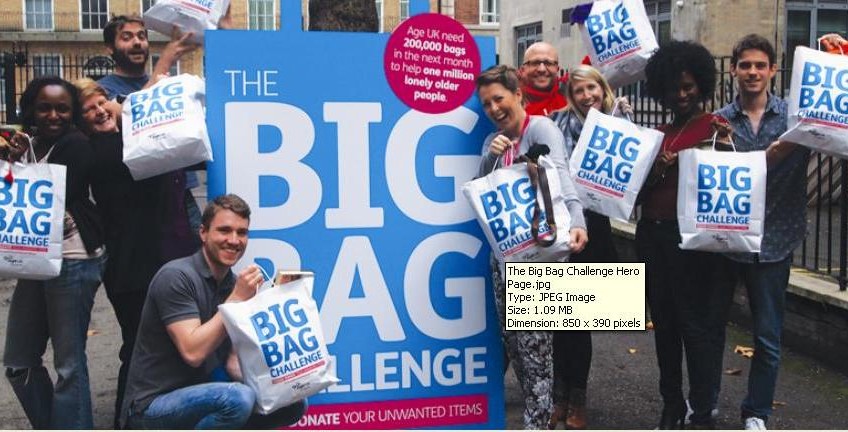 Clear your clutter to support The Big Bag Challenge

A new survey for Age UK reveals some of the sacrifices Brits will make to maintain their commitment to fashion with nearly a third (31%) dipping into their savings to buy clothes.

Women are most likely to sacrifice their savings with one in three confessing to using money they had put aside but men are less fussy with 33% spending less than £10 a month on clothes.

Published to coincide with the launch of the Charity’s biggest stock appeal, The Big Bag Challenge, which is calling on people to donate their unwanted items to meet a massive 200,000 bag target to help Age UK combat loneliness, the survey also importantly found that despite the nation’s fixation with fashion, a quarter of the population admits to not wearing at least 25% of the items in their wardrobe.

Women are the most determined to remain fashion forward, with 36% buying clothes every couple of months and over a third (37%) spending between £30 – £100.

Suggesting men are less concerned with their appearance, four in ten (42%) of those questioned about their seasonal wardrobe said that they believe clothes are all the same.

In stark contrast women admitted to being excited about stocking up on this season’s must-haves, with a third looking forward to wearing woolly jumpers and a quarter thrilled at the thought of winter boots.

Whilst 60% of women remove or separate clothes in their wardrobe when the seasons change, men are less organised, with just 38% doing the same.

Four in ten women like to split their wardrobes by seasons, with a further two in ten removing items altogether when the seasons change, in contrast to just under one in ten men. In fact men seem to be mystified by women’s orderliness, with nearly half (48%) admitting that they don’t do anything at all.

Some partners even go as far as removing clothes from wardrobes and storing summer clothes for their loved one – 8% of men say their partners do this versus 1% of women.

This autumn Age UK is encouraging the nation to take an honest look at their wardrobe and bag up their unworn items as part of a nationwide stock appeal. The Big Bag Challenge calls upon people across the country to donate as many bags of quality goods, including quality clothes, shoes, books, accessories and home wares, as possible to their local Age UK shop.

The goal is to get 200,000 bags in just four weeks, helping the Charity raise much-needed funds for vital national and local services which provide the only human contact some older people have.

Leading psychologist, Donna Dawson, says:  “Keeping up with fashion is certainly more of a female interest, but regularly buying clothes can soon cause storage problems. An over-crowded wardrobe makes it hard to find what is available, with ‘perfect’ items getting lost in a crush of less-perfect ones. Heaving through hangers and drawers is time-consuming and women could certainly take a tip from the nation’s men and save money by being more discerning. However, it seems that the nation as a whole could benefit from a good sort out, liberating the best items and giving people the space control and sense of ease that accompanies a thorough de-cluttering.”

Hugh Forde, Managing Director for Retail at Age UK, said: “We’re asking everyone to clear out their clutter and join The Big Bag Challenge and it couldn’t be easier – simply drop a bag of unwanted items to your local shop which are reliant on the kind donations of the local community to keep the shelves stocked. Only with your support can we continue our work to raise vital funds to support lonely older people both in the local area and across the country and give everyone a chance to love later life. Any bag will do and every bag you fill really does count!”

With around one million older people regularly going an entire month without speaking to anyone, loneliness is a massive issue for people in later life. With Lord Sugar, Christopher Biggins, Lionel Blair and Liz McClarnon all donating items, take part in Age UK’s Big Bag Challenge this autumn to help be the difference between someone feeling the desperation of loneliness and having the joy of friendship.

Go to www.ageuk.org.uk/bigbagchallenge to find your local store and get more information.