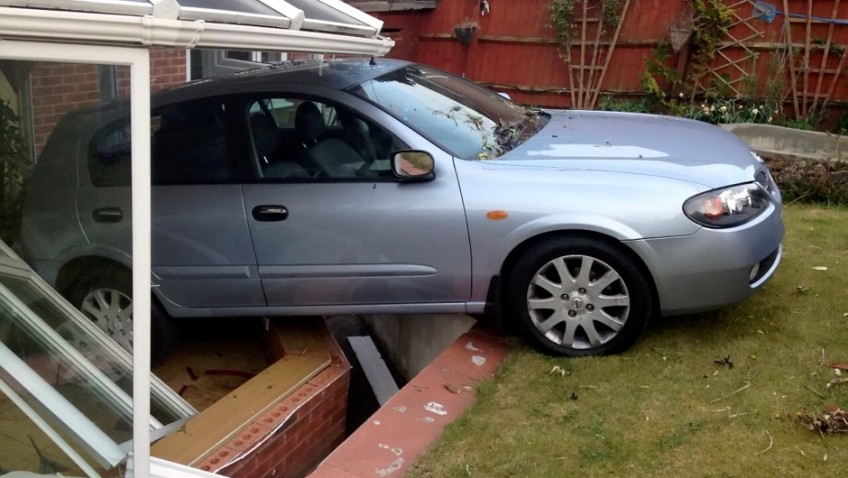 An elderly widow told yesterday how EastEnders saved her life after she went to watch her favourite soap – minutes before a runaway car smashed through her CONSERVATORY.

A car owner had parked his Nissan Almera at the top of a steep road and just got out and shut the door when it suddenly started rolling backwards.

It hurtled 100ft down the road before it mounted the kerb, bounced 6ft into the air and landed in the middle of the conservatory with its front wheels resting on the lawn.

Incredibly, no one was injured in the freak accident which happened on Hall Lane, Bilston, West Mids., at 7.30pm on Tuesday.

Homeowner Vera Lampart, 74, told yesterday (Wed) how she had been sitting in her conservatory of her £200,000 two-bedroom bungalow minutes before the crash.

Mrs Lampart, who has five grown-up children and seven grandchildren, said: “I had been sitting in the conservatory and went into the lounge to watch Emmerdale at about 7pm.

“Then at 7.30pm EastEnders came on so I decided to stay in the lounge and that’s when I heard this almighty noise.

“I went and checked and the car had broken most of the windows in my conservatory.

“If it hadn’t been for Emmerdale and EastEnders I would have still been in there and would have died.

“I like to sit in the conservatory at night because it’s cosy and on clear nights you get a wonderful view of the stars.

“There is water coming into the conservatory now so I need to get in touch with the insurers to get it boarded up and then fixed.

“We spoke to the driver and he was very sorry about it.

“I am so nervous and shaken up about it, it was so frightening. I couldn’t sleep after it happened.”

Mrs Lampart, a retired care assistant, has lived at the property for 12 years. Her husband Howard, a retired engineer at Goodyear, died last year of heart failure aged 82.

She added: “What makes it more upsetting is that my husband Howard had the conservatory built about ten years ago and we used to sit in there a lot together.

“I have a lot of memories of us sitting there and it’s a real shame that it might have to be demolished.”

A neighbour who witnessed the crash said: “It was a miracle no one was hurt or killed.

“I was walking my dog when I heard screaming and saw a chap running down the road after his car.

“The car was veering all over the place in reverse and picking up speed. It shot past me and crashed through a fence. A second later all you could hear was smashing glass.

“If the people had been sitting in their conservatory at the time they’d be gonners. The car owner looked almost in tears but thank god it happened so late at night.”

A vehicle recovery company was called to the property and spent two hours hauling the car out of the wrecked conservatory.

Sam Burke, a directors of Burke Bros Recovery, said: “The driver’s handbrake had failed at the top of a steep hill after he parked and shut the door.

“Apparently the car just flew down the hill, through the fence and came to rest where it did.

“The car’s a write-off but it’s so lucky the woman who lives there wasn’t hurt.

“We had to get two towing trucks and an incident unit van over there to pull the car out and it took two hours.”

Sam’s mum Alison, 52, who tweeted pictures of the scene, added: “We just never know what we get called out to.”