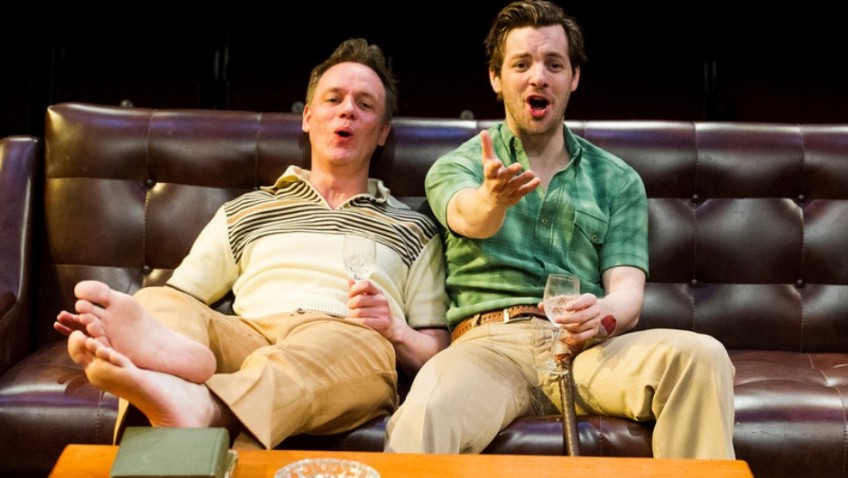 Robert Tanitch reviews In the Vale of Health at Hampstead Theatre, London NW3.

In the Vale of Health is the collective title for four plays by Simon Gray about two brothers, whose home is in the Hampstead hamlet. The action is spread over 27 years. They can be seen separately or all on one day.

Michael and Jason (nicknamed Japes) are particularly close because of three things. Firstly, there was a swimming pool accident when they were very young which crippled Japes. Secondly, their parents died whilst they were still in their teens. Thirdly, they fell in love with the same woman. She married Michael and had a daughter by Japes. Michael tacitly accepts their long-term affair but thinks the daughter is his.

Michael becomes a highly successful author. Japes becomes an alcoholic and drug addict.  .  The brothers’ relationship was modelled on Gray’s own relationship with his younger brother Piers, who died as a result of his alcoholism aged 49.

The most arresting scene has the singularly unlikeable and bad-tempered daughter falsely accusing her father of having abused her when she was young. The text also includes a bitter attack on the modern school of “in-your-face” playwrights and the paucity of their expletive vocabulary.

Japes, the first play, which is dedicated to Piers, was originally directed by Peter Hall in 2001 when the brothers were played by Toby Stephens and Jasper Britton. It was while the play was still in rehearsal that Simon Gray realized he had more to say and went on to write three more plays, which give different perspectives and different endings.

Michael, Japes Too and Missing Identities are now getting their first performance in a marathon production by Tamara Harvey. The brothers are played by Jamie Ballard and Gethin Anthony and they are both excellent.

I saw all four plays on the same day, starting at 11.00am and finishing at 9.35pm. There were breaks, of course. If you want to see only one play, I recommend you see Japes. If you also want to see any of the other three, you will have to be prepared to sit through some very long scenes, which you have already seen before, being repeated word for word.