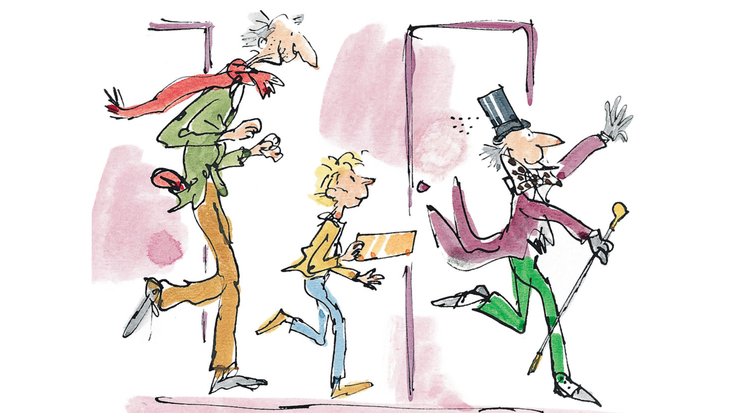 50 books every child should read

Roald Dahl’s Charlie and the Chocolate Factory has topped a list of 50 books which every child should read by the age of 16.

Dahl’s magical story about Charlie Bucket’s golden ticket proves to be the most loved for children, with Lewis Carroll’s Alice in Wonderland finishing runner-up. The study of 2,000 reading enthusiasts was created to determine the ultimate list of the top 50 books that should be on every child’s reading list, encouraging bedtime reading for British families.

It covers a range of traditional classics and more modern tales – The Hunger Games by Suzanne Collins, Mark Haddon’s The Curious Incident of the Dog in the Night-Time and J.K. Rowling’s Harry Potter adventures also featured.

Winnie the Pooh, The Hungry Caterpillar and Postman Pat.

The research, commissioned by Sainsbury’s to celebrate World Book Day, found C.S. Lewis’ adventures in Narnia are no less thrilling today – The Lion, the Witch and the Wardrobe finished third in the list of 50 books, while Winnie the Pooh and Black Beauty rounded off the top five.

Mavis Sarfo, from Sainsbury’s Book Team, said: “The 50 books show a much-cherished collection of some of the finest children’s writing that has delighted readers and transported them to other worlds for generations.

“It’s fantastic to see that so many parents get involved in reading bedtime stories by putting on character voices and wearing costumes to bring characters to life.

“Encouraging children to role play through dress up and becoming ‘The Gruffalo’ or ‘Elsa from Frozen’ is crucial in developing imaginations from an early age and a love of reading.

“Encouraging role play by dressing up as favourite book characters further fuels this and Sainsbury’s has a great selection of children’s costumes and books to celebrate World Book Day – we look forward to welcoming book lovers of all ages in our stores.”

Roald Dahl cements his place as arguably the greatest children’s author ever seen with five books in the top 50 list – Charlie and the Chocolate Factory, James and the Giant Peach, The BFG, Matilda and The Twits. he research also surveyed parents of children aged under 16 and found a good story really is timeless, results showed – six in ten parents still like to read stories to their children that their own parents once read to them as a little one.

Perhaps it’s no surprise then that 72 per cent of parents said bedtime reading is one of the most key bonding experiences with their child.

Paddington Bear has seen a resurgence in recent times with his appearance on the silver screen but the marmalade lover is still enormously popular in page form and tops the best-loved children’s character.

Other childhood favourite characters in the top 10 include, The Gruffalo, Cinderella and The Hungry Caterpillar

Tony Robinson, actor, comedian and author, who worked with Sainsbury’s on the campaign, added: “The response from parents and the lengths they go to in bringing these stories to their children as vividly as possible is amazing.

“It shows that the power of make believe is so important in the development of a child and a key role in parents bonding with their young ones.”

To celebrate the nation’s week of reading, Sainsbury’s is encouraging children to read more by exploring the world of books and dress up as their favourite fictional characters.

activities to encourage children to read more and inspire parents to get involved.

THE 50 BOOKS EVERY CHILD SHOULD READ BY AGE 16