Excess winter deaths among the over-65s fell by a dramatic 50 per cent following the introduction of the winter fuel payment, according to ground-breaking new research by the charity Age UK.

The new research, first published in The Journal of Public Health, shows the 50 per cent decrease is equivalent to preventing the deaths of 12,000 older people every year who would have otherwise perished during the winter months.

By controlling for other associated factors such as temperature change and household spending on energy, researchers have concluded that the cash benefit has had a really significant impact on helping many older people survive the winter months – for the first time providing statistical evidence which suggests the hugely important role that the winter fuel payment plays.

The analysis indicates that receiving a cash benefit labelled specifically as support for help with energy costs, paid during the winter, appears to prompt people to take positive steps to keep themselves warm.  These might be keeping the heating on for longer or turning up the thermostat, providing better protection against cold-related illness such as high blood pressure, heart-attacks and strokes, and ultimately avoidable, premature deaths.

Professor James Goodwin, Head of Research at Age UK, said: “This new research provides us with the strongest indicator yet that the winter fuel payment really does help to reduce excess winter deaths among older people. We have always known that the winter fuel payment provides a vital cash boost to help people meet these increased heating costs – we now have evidence that suggests it can literally make the difference between life and death.”

The majority of excess winter deaths are among older people and shockingly, most of these deaths are caused by prolonged exposure to the cold inside people’s homes.  ‘Excess winter deaths’ are not deaths that would have occurred anyway: they are avoidable and preventable. Yet the research also reveals that over the last 60 years 2.6 million people – the majority aged over 65 – have died unnecessarily because of the cold.

Even today, around 25,000 older people continue to die from cold weather each year – that’s one person aged over 65 every seven minutes.

In addition to the human cost, there is also a clear financial price to pay in terms of increased pressure on local authorities, the NHS and the social care system. The latest estimate from Age UK is that the cost of cold homes to the NHS is around £1.36bn every year.

Caroline Abrahams, Charity Director at Age UK said: “It is deeply sobering to think that over the last 60 years, a massive 2.6 million people in our country have died because of the cold, most of them older people. Today, a toxic combination of high energy prices, coupled with poorly insulated homes, means millions of older people are unable to afford to heat their homes to sufficient temperatures to keep themselves consistently warm and well.

“This new Age UK research indicates that the winter fuel payment is an important weapon in the battle against winter illness and avoidable deaths. It seems it literally saves lives by giving older people the confidence to keep the heating on for longer, and turn it up a notch or two, helping to safeguard them from the deadly risk of the cold.

“While we’ve made some progress over the years, it is unacceptable that around 25,000 older people are still dying annually from cold related illness.  A long-term solution to this public health scandal is however within our grasp in the form of an ambitious programme to bring all our housing up to a high energy efficiency standard.

“We need all the political parties to commit to including this in their national infrastructure plans. No older person should worry that they could die from the cold in their own home and if we invest enough in energy efficiency they wouldn’t have to.”

Graph showing the reduction of Excess Winter Deaths (EWDs) among population aged 65+ in England and Wales before and after Winter Fuel Payment (WFP) was introduced [source: Age UK] 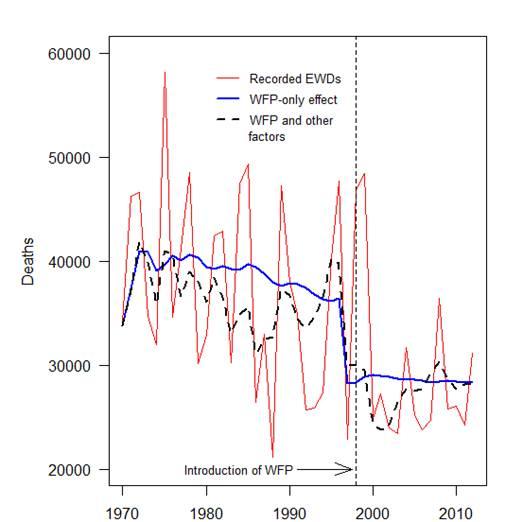