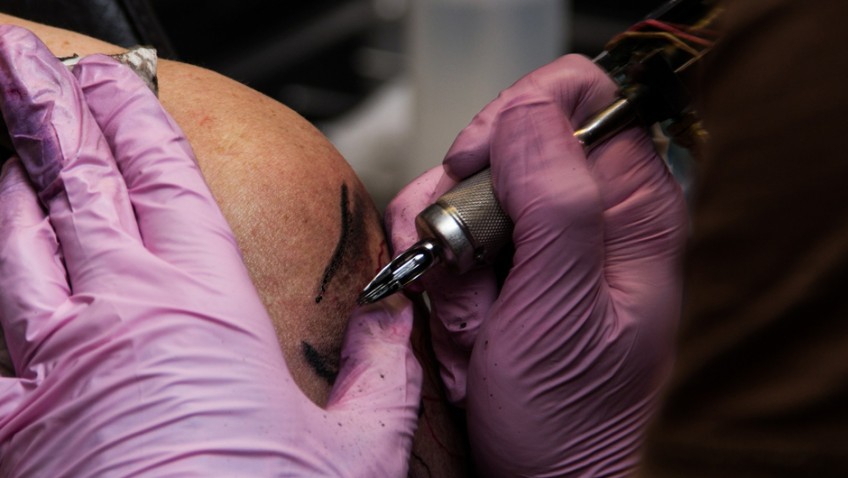 A 76-year-old grandad proved his love for music is more than just skin deep after getting the logo of his son’s rock band – as a TATTOO.

Music-fan Mel Cartwright now has the image of a baby head and cross bones emblazoned across his right arm in homage to the band named Evil Blizzard.

The grandad-of-two made the trip to the tattoo studio with his son Jeff, who is inked from head to toe, to have his first ever tattoo session.

Mel’s wife of 57 years, Joyce, passed away from Alzheimer’s in 2014 and Mel himself had a stroke last year.

He says he feels “the time was right” for his first tattoo and son Jeff, who also had the tattoo done, said it was nice to see his dad enjoying himself again.

Mel, Penwortham, Lancs., who now works as a volunteer with Alzheimer’s sufferers, explains how the tattoo has been long coming but admits his wife would say he was having a “later life crisis.”.

He said: “I’ve always been a fan of music and I’m a big fan of Jeff’s band. I’ve been to quite a few gigs and always wanted a tattoo but was never sure what to get. It just seemed to suit me.”

The punk rock band based in Preston, Lancs., have been together four years and each member has their own distinctive fancy dress costume.

Jeff, 45, is mop man and says he’s glad his dad has joined the fan club.

“We have some very loyal fans,” Jeff said. “The band has become quite popular, in high demand for lots of gigs and dad has always been a big fan.

“He’s had a new lease life recently and it’s great to see.”

Mel visited Studio 81 in Preston for the session and says pain has never been an issue for him.

He said: “The tattoo is about the size of the palm of my hand but I wasn’t too fussed about it as when I’ve set my mind on something, I’ll definitely do it.”