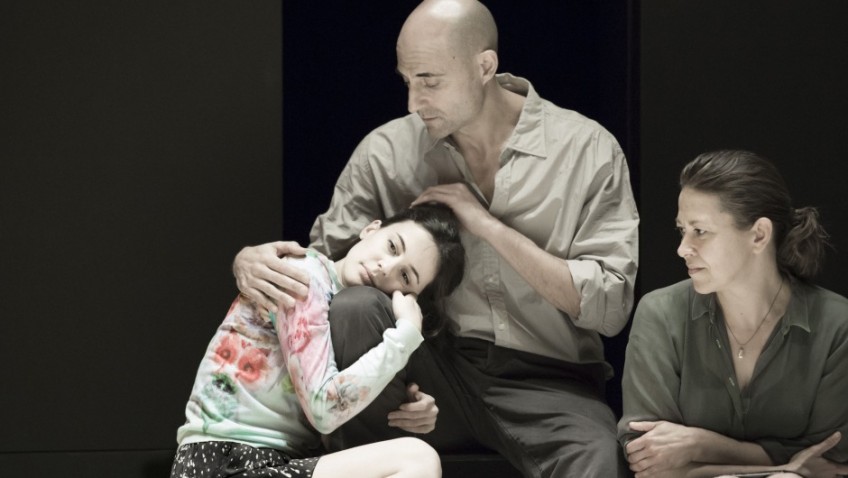 Robert Tanitch reviews A View from the Bridge at Wyndham’s Theatre, London, WC2

Arthur Miller was born in 1915. His best plays are performed regularly in the international repertoire. There will always be actors who will always want to play Joe KelIer in All My Sons (1947), Willy Loman in Death of a Salesman (1949), John Proctor in The Crucible (1953), and Eddie Carbone in A View from the Bridge (1955).

In ancient times tragedies were always about great men and women, kings, queens, generals, figures of myth, whose fatal flaws in their characters led directly to their deaths. What was original about the plays Miller wrote was that they were Modern Greek tragedies of ordinary working class men. Eddie Carbone (Mark Strong) works in the docks in New York. He lusts after his seventeen-year-old niece (Phoebe Fox), who is in love with Rudolpho, an illegal immigrant (Luke Norris), and in the true Greek tragic manner, it is this fatal flaw in his character, which drives him to do a terrible thing and destroy not only himself but also the lives of others.

All the best Greek tragedies have their own relentless momentum. As Eddie heads faster and faster towards the precipice, it becomes all the more horrifying, because there is nothing anybody can do to stop the disaster.

“When I do a play,” says the Belgian director Ivo van Hove, “I want to do it in the most extreme way possible.”

Van Hove can say that again. His production, originally seen at the Young Vic last year, may irritate some people because he gets rid of all the domestic detail and realism which Miller put into the play to disguise its Greek Tragedy origins.

The stage is stripped bare and remains an empty space. The story line, however, is as gripping and as powerful as ever. The actors are free to give big performances, big enough to fill an amphitheatre. Mark Strong’s dynamism is undiminished. The production is often deliberately artificial. When Marco (Emun Elliott) raises a chair by only one of its legs, high above his head, he holds it for such a very long time that it becomes as much a statement as the Statue of Liberty is a statement. The final act of revenge is totally non-realistic with the actors in a tight rugby scrum and blood raining down on them.

The Lord Chamberlain banned the play at its London premiere in 1956. It had to be performed privately. The Comedy Theatre was turned into a club and audiences had to pay to become members before they could buy tickets.

The cause of the ban was the scene where Eddie kisses Rudolpho on the lips in a warped attempt to convince his niece that Rudolpho is gay. Sixty years on the scene has lost none of its shock-value.

Still, it was surprising, in this day and age, to hear just how immature some members of the audience were in their reaction with their very loud gasps and hysterical giggling.